William Rainey RI RBA ROI (21 July 1852 – 24 January 1936) was a British artist and illustrator. He was a prolific illustrator of both books and magazines and illustrated about 200 books during his career. He also kept painting and exhibited his work frequently. Rainey also wrote and illustrated six books himself, one was a colourful book for young children, the other five were juvenile fiction.

Rainey was born in Kennington, London, on 21 July 1852. He was the third of eight children of the distinguished anatomist and teacher George Rainey (1801 – 16 November 1884) and Martha Dee, a farmer's daughter (c. 1827 – 27 May 1905). Rainey's parents were married at the parish church in Twyning, Gloucestershire, England on 31 December 1846. Rainey was originally intended for a career at sea, but his father, who had himself run away from an early apprenticeship, allowed him instead to study at the South Kensington School of Art. The 1871 census shows that, by the time Rainey was 18, he was a student at the Royal Academy.

Rainey's wife died in Eastbourne in the second quarter of 1919. The local newspaper recalled that Rainey had moved to Eastbourne about this time, and it was the Eastbourne address that the War Office used in the correspondence about the Medals awarded to his son Victor.

Raines was walking on Grand Parade on the sea-front promenade at Eastborne on 24 January 1935 when he collapsed and died before a doctor could be called. He was only a short distance from his home at Avonmore, 24 Granville Road. His daughter Florence Harriet was the executor of his will. His estate was valued at just under £400. 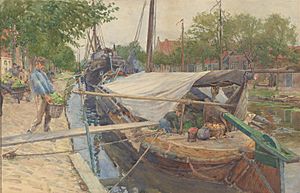 Rainey did more illustration for magazines that for books. Among the magazines he illustrated for were:

Rainey illustrated many stories for magazines. The first example was story that was translated into French for Hetzel's Magasin d’Éducation et de Récréation [fr]. The story was Jock et ses amis (Jock and his Friends) write by A. Decker from an original by E. Hohler.

Rainey also illustrated stories for adults. He was asked to illustrate the first story published in the new Strand Magazine. This was a short story, A Deadly Dilemma, about the dilemma a young man faces between derailing a train or leaving his sweetheart to be run-over, by Grant Allen.

Colour illustration, which had always been used for books for small children, became more and more common for books for young adults, as the process got cheaper. Rainey illustrated Plutarch's lives for boys and girls : being selected lives freely retold (1900) by W. H. Weston with 16 full-page colour plates. Novels novels for juveniles usually had from four to twelve plates as can be seen from publisher's catalogues at the time, anthologies, non-fiction books, and books for young children often had more.

As well as the books he illustrated, Rainey also wrote and illustrated at least six books himself. Except where noted, the initial source of the following list is Kirkpatrick.

Pennell says that, in his work, Rainey united the best traditions of the old with the most modern developments. Pennell also listed Rainey among those artists whose names, like their works, are household words and who have a power of rendering events of the day in a fashion unequalled elsewhere.

Peppin stated that His delicate brush strokes reproduced well in both colour and halftone. She also noted that Thorpe considered him a great but unrecognised illustrator who was ‘never conventional in his designs, had a fine sense of character, and maintained the interest throughout the whole of the drawing. Newbolt noted that Rainey He had a long and successful career as a book illustrator, which continued right up to the end of his life. His obituary in stated that many a small boy who has gazed with speechless admiration at some new gift book has been unconsciously grateful to Mr Rainey, for a great deal of his early work was the illustrating of boys' books.

Rainey attracts relatively modest prices at auction. The following are the auction prices recorded by Bénézit for works by Rainey:

All content from Kiddle encyclopedia articles (including the article images and facts) can be freely used under Attribution-ShareAlike license, unless stated otherwise. Cite this article:
William Rainey Facts for Kids. Kiddle Encyclopedia.