The Wills Memorial Building (also known as the Wills Memorial Tower or simply the Wills Tower) is a neo-Gothic building in Bristol, England, designed by Sir George Oatley and built as a memorial to Henry Overton Wills III by his sons George and Henry Wills. Begun in 1915 and not opened until 1925, it is considered one of the last great Gothic buildings to be built in England.

Standing near the top of Park Street on Queens Road, it is a landmark building of the University of Bristol that currently houses the School of Law and the Department of Earth Sciences, as well as the Law and Earth Sciences libraries. It is the fourth highest structure in Bristol, standing at 215 ft (65.5 m).

Many regard the building as synonymous with the University of Bristol. It is the centrepiece building of the university precinct and is used by the university for degree ceremonies and examinations, which take place in the Great Hall.

"a tour de force in Gothic Revival, so convinced, so vast, and so competent that one cannot help feeling respect for it."

It has been designated by English Heritage as a Grade II* listed building and serves as a regional European Documentation Centre. 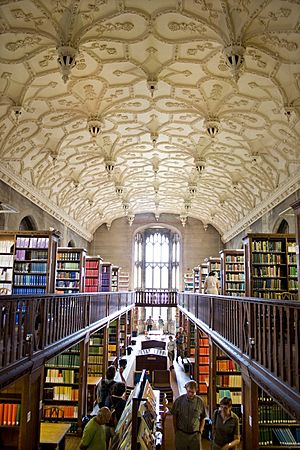 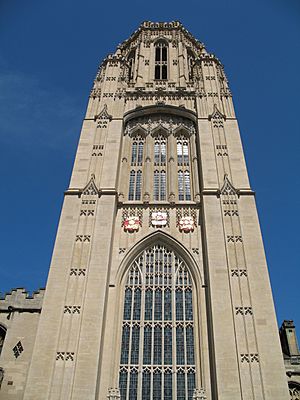 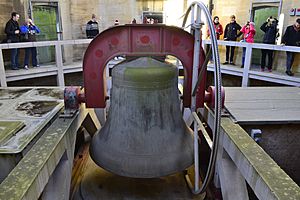 Great George in the tower of the Wills Memorial Building

The Wills Memorial Building was commissioned in 1912 by George Alfred Wills and Henry Herbert Wills, the magnates of the Bristol tobacco company W. D. & H. O. Wills, in honour of their father, Henry Overton Wills III, benefactor and first Chancellor of the university who donated £100,000 to the university. Sir George Oatley, who also worked on a number of other buildings for the University, was chosen as architect and told to "build to last". He produced a design in the Perpendicular Gothic style, to evoke the famous university buildings of Oxford and Cambridge. The building was funded through the fortunes which the Wills family made through tobacco. Oatley later claimed that his inspiration for the building came from a dream where he saw a tower on a hill, with shields around it.

Construction started in 1915 but was halted in 1916 due to the continuation of the First World War. Work resumed in 1919, and the Wills Memorial Building was finally opened on 9 June 1925 by King George V and Queen Mary, having cost a total of £501,566 19s 10d. The building was opened with a Royal Salute of 21 chimes from 'Great George', the nine-and-a-half ton bell within the octagonal belfry of the tower, which is tolled on the death of a monarch or chancellor. Oatley received a knighthood that year in recognition of his work on the building.

In 1940, during the Bristol Blitz of the Second World War, the Great Hall with its hammerbeam roof was badly damaged by a German bomb-blast. It was restored in the 1960s to Oatley's original design; at the same time the adjoining wing was enlarged by Ralph Brentnall.

The building's dominant feature is the Wills Tower, built in reinforced concrete faced with Bath and Clipsham stone, with carving designed in collaboration with Jean Hahn of King's Heath Guild, Birmingham. At 215 ft (65.5 m) high it is over twice the height of the nearby Cabot Tower. It is 16 metres square and ornamented with heraldic shields. It is topped by an octagonal lantern which houses Great George (England's sixth-largest bell, weighing over 9.5 tonnes) which strikes on the hour.

In addition to the Great Hall there is a General Library, Reception Room and Council Chamber and a further 50 rooms including some teaching space such as seminar rooms and lecture theatres. In the Entrance Hall are two ceremonial staircases. The building is also used as a conference venue. 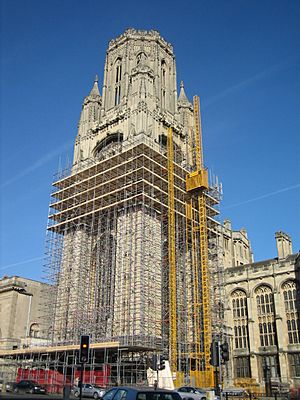 In 2006, cleaning work began on the Wills Memorial Building costing £750,000. Cleaning on the building revealed the engraving "IO TRIVMPHE" intended as a tribute to the architect of the building Sir George Oatley. The engraving had remained hidden for over 80 years and recognises the role of Sir Isambard Owen (then Vice-Chancellor) in the realisation of Oatley's plans. Harry Patch, World War I veteran who also worked on the building, re-unveiled the now clean building.

All content from Kiddle encyclopedia articles (including the article images and facts) can be freely used under Attribution-ShareAlike license, unless stated otherwise. Cite this article:
Wills Memorial Building Facts for Kids. Kiddle Encyclopedia.