Wilmington is a city in Will County, Illinois, United States. It is approximately 60 miles south-west from downtown Chicago (the Chicago Loop). The population was 5,724 at the 2010 census.

Thomas Cox purchased land near Alden's Island in 1834 and built a sawmill, corn cracker, gristmill, and a carding machine facility all of which were powered by water wheels situated on a mill race off of the Kankakee river which runs through Wilmington.

The town is also home to the historic Eagle Hotel located on the northwest corner of state Rt 53 (Rt 66) and water street (Rt 102). 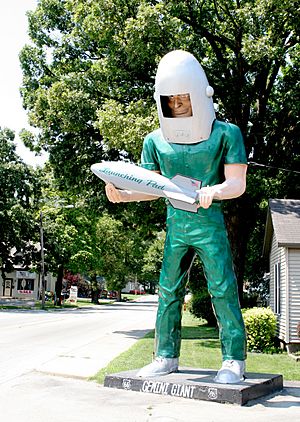 The Gemini Giant in Wilmington on U.S. Route 66

Wilmington was founded by Thomas Cox. It later became famous as a stop on U.S. Route 66, which followed the route of modern-day Illinois Route 53. The only rest-inn within the town is called "Van Duyne's" and is situated right on old Route 66. A notable attraction for travelers along this route is the "Gemini Giant" Muffler Man type statue located next to the former Launching Pad fast food restaurant. Countless photos of travelers, both domestic and foreign, standing at the base of the Gemini Giant are taken each year.

A bus-station scene from Planes, Trains & Automobiles was filmed in Wilmington. The bus station was demolished in 2011.

One of Wilmington's most notable geographical features is a large island in the Kankakee River, much of which is occupied by a city park. This island divides the river into a large channel and a smaller one which was used as a natural mill race during the early years of the city. The island is the source of the city's nickname, "The Island City."

Wilmington has been the featured topic in no less than 4 songs:

"It's A Wilmington Day" by Charlie Stewart and Comet Country and "I Hate This Town" both rose to Number 1 requested songs on local radio stations.

All content from Kiddle encyclopedia articles (including the article images and facts) can be freely used under Attribution-ShareAlike license, unless stated otherwise. Cite this article:
Wilmington, Will County, Illinois Facts for Kids. Kiddle Encyclopedia.