Kids Encyclopedia Facts
This page is about the mountain in Colorado. For other peaks, see List of peaks named Mount Wilson.

Wilson Peak is a 14,023-foot (4,274 m) mountain peak in the U.S. state of Colorado. It is located in the Lizard Head Wilderness of the Uncompahgre National Forest, in the northwestern San Juan Mountains. It is the highest point in San Miguel County.

The mountain was named for A.D. Wilson, the chief topographer with the Hayden Survey. Nearby Mount Wilson also honors him. 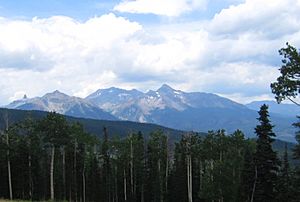 Wilson Peak is climbed by hundreds each year, primarily in summer months, but winter ascents are not unusual and sometimes serve as the beginning of backcountry skiing descents. Summer ascents of the peak are considered Class 3 technical climbs, meaning that scrambling over rock is required (with hand holds being used for balance) and ropes typically not employed.

All content from Kiddle encyclopedia articles (including the article images and facts) can be freely used under Attribution-ShareAlike license, unless stated otherwise. Cite this article:
Wilson Peak Facts for Kids. Kiddle Encyclopedia.