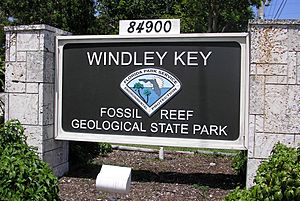 Windley Key is an island in the upper Florida Keys in Monroe County, Florida, United States.

All of the key is within the Village of Islamorada as of November 4, 1997, when it was incorporated.

Windley Key is home to Theater of the Sea, a popular tourist attraction since 1946.

A Florida State Park Service geological site, and the popular Holiday Isle resort are also on the island.

Prior to the building of the Overseas Railroad, there were two separate islands there, known as the Umbrella Keys. Railway construction involved filling between these two keys which then became known as Windley Key, after a settler. This is the site of several extensive quarries which for many years supplied building stone, known locally as keystone. The railway station on Windley Key was known as Quarry.

All content from Kiddle encyclopedia articles (including the article images and facts) can be freely used under Attribution-ShareAlike license, unless stated otherwise. Cite this article:
Windley Key Facts for Kids. Kiddle Encyclopedia.