Winona is a small populated place in Coconino County in the northern part of the U.S. state of Arizona. At one time it was also called Walnut, and Winona's railroad station was renamed Darling in honor of an engineer.

Winona was once an incorporated village called Walnut Creek, until the 1950s when it became part of Flagstaff. Walnut Creek runs through Winona. It has been a dry creek bed since a dam was built above Walnut Canyon in the 1950s to provide Flagstaff with a reservoir. Before this, the creek ran year round. 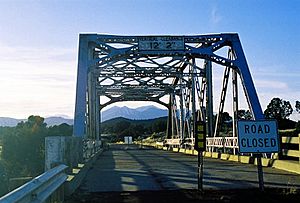 Winona is located along U.S. Route 66 and was made famous in the song "Route 66". It lies about thirteen miles (19 km) east of Flagstaff and is out of sequence with the rest of the cities named in the song because of its near-miss: "Don't forget Winona."

The singer Wynonna Judd adopted her name upon hearing "Winona" in "Route 66."

All content from Kiddle encyclopedia articles (including the article images and facts) can be freely used under Attribution-ShareAlike license, unless stated otherwise. Cite this article:
Winona, Arizona Facts for Kids. Kiddle Encyclopedia.