The Wisconsin International Raceway (WIR) is an asphalt stock car racing oval and dragstrip in the Town of Buchanan, in Outagamie County, just outside Kaukauna, Wisconsin, USA. 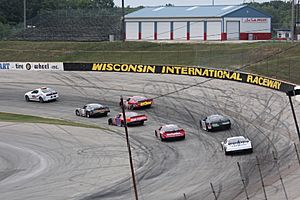 The track had an annual American Speed Association event when the sanctioning body was in existence. The track resumed hosting ASA events after the series was reorganized, and it held an event in 2007 for the ASA Midwest Tour. That event, the Dixieland 250, is now part of the ARCA Midwest Tour schedule and is one of the most prestigious events on the calendar, attracting NASCAR champions Kevin Harvick and Ron Hornaday Jr. in 2009 and Kyle Busch in 2017. The race was part of the NASCAR Midwest Series between 1998 and 2004 and had 13 races under NASCAR banner. Earlier the USAC Stock Car series had raced at the track.

The track has hosted an annual Red, White, and Blue State Championship Series for super late models since 1972. The series consist of three races in June (red), July (white), and August (blue). The series changed from Saturday nights to Thursday nights to combine with the weekly series in 2009. The series was part of the Midwest Challenge Series (formerly ARTGO) and later part of the Wisconsin Challenge Series. 7,832 people watched Dick Trickle win the first red race.

ASA National Tour ran a race at the facility in 2002. The race was won by Kevin Cywinski. 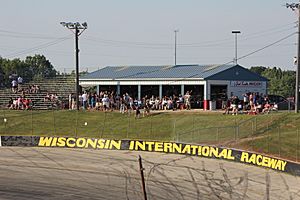 Trickle carved enough of a legacy that the track dedicated the Dick Trickle Pavilion in Turn 2. Joe Shear won the Red, White, and Blue series 1979, 1987, and 1988. 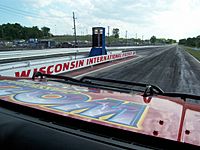 Looking down the drag strip

The dragstrip is a 1/4 mile paved track. It is one of three operating dragstrips in Wisconsin.

The track has hosted an annual "Eve of Destruction" each September since 1993 and it is the track's annual season finale for the oval track. The Eve of Destruction is one of the biggest events hosted at track, as the 10,000 seat raceway is generally packed. Drivers compete in a variety of unusual events such as chain races (two cars are chained together), spin to win (race backwards and then spin around forward for the finish), trailer races (part of the trailer must remain intact to continue racing), etc. In between races, fans are entertained by stunt car drivers. Ten school buses compete in a survival-of-the-fittest competition, where the last bus standing wins. Track owner Roger Van Daalwyk described the Eve of Destruction: "We kind of wreck everything." During the 2017 Eve of Destruction, a local driver died from injuries sustained in a figure-eight race.

All content from Kiddle encyclopedia articles (including the article images and facts) can be freely used under Attribution-ShareAlike license, unless stated otherwise. Cite this article:
Wisconsin International Raceway Facts for Kids. Kiddle Encyclopedia.