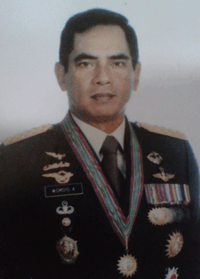 Wismoyo Arismunandar (10 February 1940 – 28 January 2021) was an Indonesian high-ranking Army officer. He was Army Chief of Staff from 1993 to 1995 and Commander of Army Strategic Command from 1990 to 1993. Arismunandar was born in Bondowoso, Dutch East Indies.

All content from Kiddle encyclopedia articles (including the article images and facts) can be freely used under Attribution-ShareAlike license, unless stated otherwise. Cite this article:
Wismoyo Arismunandar Facts for Kids. Kiddle Encyclopedia.