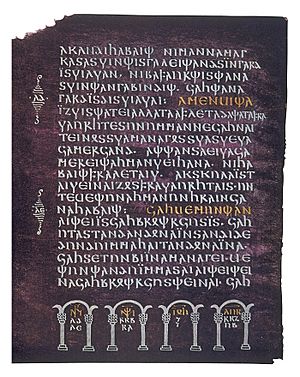 A page from the Bible.This shows part of the Codex argenteus

The Wulfila Bible (or Gothic Bible) is a translation of parts of the Bible into the Gothic language. It was done by a Christian Bishop, called Wulfila, in the 3rd century. It contains mainly a translation of the New Testament. The basis for the translation was a Greek version of the Bible. Up till then, the Goths had used runes to write. This was impractical, though. For this reason Wulfila also invented the Gothic alphabet. The Gothic alphabet is based on the Greek one.

Many copies of parts of the text still exist today. Most of them are from the 6th to 8th century. The Wulfila bible is the oldest written text of a Germanic language. It is very important for research.

Text of The Lord's Prayer in the Wulfilabible

þ is pronounced like the English th in the.

All content from Kiddle encyclopedia articles (including the article images and facts) can be freely used under Attribution-ShareAlike license, unless stated otherwise. Cite this article:
Wulfila Bible Facts for Kids. Kiddle Encyclopedia.