Wynwood is a neighborhood in Miami, Florida. Wynwood is known for being an entertainment district, with artwork, restaurants, breweries, clothing stores, dance venues, among other retail options. Formerly an industrial district, the area is now known for the murals that cover the walls of many of the buildings. It is north of Downtown Miami and Overtown, and adjacent to Edgewater. Wynwood has two major sub-districts, the Wynwood Art District in northern Wynwood, and the Wynwood Fashion District along West 5th Avenue. Wynwood roughly is divided by North 20th Street to the south, I-195 to the north, I-95 to the west and the Florida East Coast Railway to the east.

Wynwood has long been referred to as Little San Juan, and is commonly known as El Barrio, because many Puerto Ricans immigrated to this Miami neighborhood from the island and northeastern cities in the 1950s. Puerto Rican-owned restaurants, shops, markets and other businesses line the streets of Wynwood. Since the early 2000s, the neighborhood has seen a rising amount of investment. The Midtown Miami development construction began in 2005 between North 29th and 36th Street and Miami Avenue and the Florida East Coast Railway (FEC) on what was historically an FEC rail yard. This brought renewed attention to the area, previously abandoned warehouses had begun to be occupied by artists, restaurants, cafés, and lounges. Tony Goldman, a developer, also assisted in the growth of Wynwood by creating a mecca out of the already present graffiti. In 2009, Goldman commissioned artists to create the Wynwood Walls. Located in the Wynwood Art District, this is an outdoor exhibition of rotating street art.

The Wynwood Art District is a sub-district of Wynwood that contains over 70 galleries, museums and art collections. It is roughly bounded by North 36th Street (north) First Avenue (east). 36th Street is one of the main streets in Wynwood, and contains a large number of art studios and galleries. The second Saturday night of every month, is "ArtWalk" in Wynwood, and the art galleries and studios open their doors to the public for viewing. Wynwood is also home to Wynwood Walls, an outdoor mural permanent exhibit featuring some of the worlds most renowned street artists. Additionally there are hundreds of other street art and graffiti murals around the district curated yearly by Primary Flight making it one of the biggest street art districts in the world. Wynwood is also home to The Armory Studios, a state of the art recording studio and event space.

The Miami Fashion District is a sub-district of Wynwood in Miami, Florida, United States. It is within the larger neighborhood of Wynwood. It is bounded by North 30th Street to the north Fifth Avenue, where a lot of the major clothing retailers and distributors are located.

The Wynwood Technology District is a sub-district of Wynwood.

Wynwood is served by Metrobus and Miami's free trolley service throughout the area, by Metromover's School Board station to the south, and by the Miami Metrorail in adjoining Allapattah less than a mile due west at:

In Summer 2016, Wynwood experienced a particularly high rate of Zika infection, as part of the 2015-16 epidemic. On 1 August 2016, the Centers for Disease Control and Prevention issued a travel warning, advising pregnant women not to visit the Wynwood, Design District and Midtown Miami areas. This was the first time the CDC had advised against visiting a neighborhood in the United States to avoid catching an infectious disease.

On August 11, 2016, four more cases of Zika were diagnosed in the Wynwood section of Miami. This brought the total count in Miami to 21 cases. All of them were in the Wynwood Section. Mosquito-control efforts in Wynwood have been difficult because it's a mixed-use area, where industrial sites are located next to a blend of residences and businesses.

The US CDC on December 9, 2016, updated its warnings for 'red areas' ("Zika active transmission areas") and downgraded Wynwood, North Miami Beach, South Miami Beach, and Little River, to a 'yellow area' "where the risk of Zika remains but is no longer greater than that in the rest of Miami-Dade County." 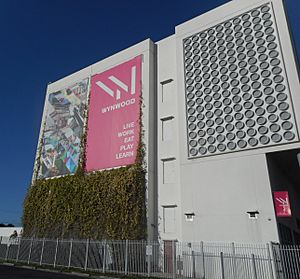 For some years, the neighborhood has been gentrified with large investments and developments. In 2010, the abandoned Wynwood Free Trade Zone at 2235 NW 5th Avenue was reconverted into a working production studio for films and television shows. In July 2011, production plans were announced for the 2011 Charlie's Angels to be filmed in the old free trade zone building in Wynwood. Other film production studios are located in neighboring Park West, and together, form a larger, growing film production industry in Miami.

Home to a large number of art galleries, artist studios, and clothing wholesalers, the art and fashion industries are the main economic engines of Wynwood. Zak the Baker is a kosher restaurant in Wynwood.

In 2013, Miami New Times moved its headquarters to Wynwood.

All content from Kiddle encyclopedia articles (including the article images and facts) can be freely used under Attribution-ShareAlike license, unless stated otherwise. Cite this article:
Wynwood Facts for Kids. Kiddle Encyclopedia.