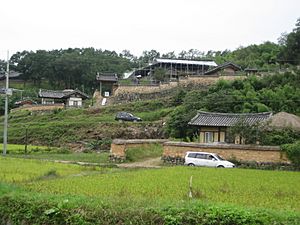 Yangdong Folk Village is a village in South Korea's North Gyeongsang Province. It is inside the city of Gyeongju, which used to be the capital of Korea. It has buildings and other things that were built in the Joseon Dynasty or that have been rebuilt in the same style. It is a UNESCO World Heritage Site.

Yangdong Folk Village is a World Heritage Site as part of a pair with Hahoe Folk Village. Both places were built during the Joseon Dynasty and many of the buildings are still intact. Some of the buildings have been rebuilt with modern materials, though. Like Hahoe, Yangdong's layout shows influences from the Confucian way of thinking and the importance of the clan system in Korea at the time. There are timber houses with tiled roofs for high-ranking people and mud houses with thatched roofs that were originally for low-ranking people. The village is on the sides of hills. The buildings were built in specific places so their rooftops would match and complement the hillsides around them. The buildings belonging to nobler or richer people are higher up on the hills. One home once had 99 rooms.

There are two Confucian schools, Oksanseowon and Donggangseowon, near Yangdong Folk Village.

Famous people from Yangdong include the Joseon era philosopher Lee Eon-jeok (1491-1553), nicknamed "Hoejae." Hojae is called one of the "Five Great Sages of the East."

All content from Kiddle encyclopedia articles (including the article images and facts) can be freely used under Attribution-ShareAlike license, unless stated otherwise. Cite this article:
Yangdong Folk Village Facts for Kids. Kiddle Encyclopedia.