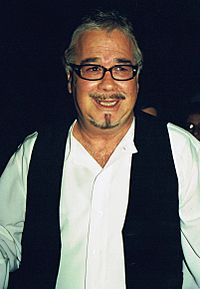 Yehuda Barkan (Hebrew: יהודה בארקן; March 29, 1945 – October 23, 2020) was an Israeli actor, movie producer, movie director, and screenwriter. He appeared in many Israeli comedy movies during the 1970s. He was born in Netanya, Mandatory Palestine. His career began in 1965. He was known for starring in Escape to the Sun and Yellow Peppers.

All content from Kiddle encyclopedia articles (including the article images and facts) can be freely used under Attribution-ShareAlike license, unless stated otherwise. Cite this article:
Yehuda Barkan Facts for Kids. Kiddle Encyclopedia.