The yellowfin surgeonfish or Cuvier's surgeonfish (Acanthurus xanthopterus) is one of several marine fish that change color as they get older. This characteristic confused fish identification, and originally put the young and adults in different species. With the arrival of aquaria and later, coral reef aquaculture, specialists noticed the color transformation. Only recently have zoologists begun to understand their metamorphosis. 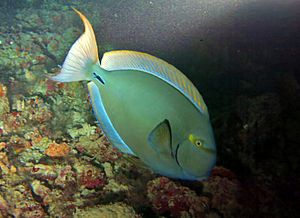 It lives near coral reefs at depths ranging from 5–90 m (16–295 ft). Its preferred temperatures are 24–28 °C (75–82 °F) at latitudes of 30°N to 30°S. It ranges from East Africa to the Hawaiian Islands and French Polynesia, north to southern Japan, south to the Great Barrier Reef, and New Caledonia, and in the Eastern Pacific, from the lower Gulf of California and Clipperton Island to Panama and the Galapagos Islands.

It feeds on diatoms, detritus film of sand, filamentous algae, hydroids, and pieces of fish. It is probably the only surgeonfish that readily takes bait.

All content from Kiddle encyclopedia articles (including the article images and facts) can be freely used under Attribution-ShareAlike license, unless stated otherwise. Cite this article:
Yellowfin surgeonfish Facts for Kids. Kiddle Encyclopedia.