Yertle the Turtle and Other Stories facts for kids

Yertle the Turtle and Other Stories is a picture book collection by Theodor Seuss Geisel, published under his more commonly known pseudonym of Dr. Seuss. It was first released by Random House Books on April 12, 1958, and is written in Seuss's trademark style, using a type of meter called anapestic tetrameter. Though it contains three short stories, it is mostly known for its first story, "Yertle the Turtle", in which the eponymous Yertle, king of the pond, stands on his subjects in an attempt to reach higher than the Moon—until the bottom turtle burps and he falls into the mud, ending his rule.

Though the book included "burp", a word then considered to be relatively rude, it was a success upon publication, and has since sold more than a million copies. In 2001, it was listed at 125 on the Publishers Weekly list of the best-selling children's books of all time.

The eponymous story revolves around Yertle the Turtle, the king of the pond. Dissatisfied with the stone that serves as his throne, he commands the other turtles to stack themselves beneath him so that he can see farther and expand his kingdom. However, the stacked turtles are in pain. A turtle named Mack, who has a checkerboard-style shell and is at the bottom of the pile, is bearing the brunt of the suffering. Mack asks Yertle for a respite, but Yertle just tells him to be quiet. Then Yertle decides to expand his kingdom and commands more and more turtles to add to his throne. Mack makes a second request for a respite because the increased weight is now causing extreme pain and hunger to the turtles at the bottom of the pile. Again, Yertle yells at Mack to be quiet. Then Yertle notices the Moon rising above him as the night approaches. Furious that something "dares to be higher than Yertle the King", he decides to call for even more turtles in an attempt to rise above it. However, before he can give the command, Mack decides he has had enough. He burps, which shakes up Yertle's throne and tosses the turtle king off the turtle stack and into the water, leaving him "King of the Mud" and freeing the others.

The second story recounts the tale of the "girl-bird" Gertrude McFuzz, who only has one small, plain tail feather and envies Lolla Lee Lou, who has two feathers. She goes to her uncle, Doctor Dake, for something that will make her tail grow. He tries to tell her that her tail is just right for her species, but she throws a tantrum. He gives in and he tells her where she can find berries that will make her tail grow. The first berry makes her tail exactly like Lolla Lee Lou's, but greed overtakes her. Now wanting to surpass Lolla Lee Lou, she eats the entire vine, causing her tail to grow to an enormous size. But because of the added weight of too many feathers, she is unable to fly, run or even walk. She panics by yelping repeatedly, while being stuck on the hill. Her uncle, hearing her painful yelps, sends for the rescue, and many other birds are forced to carry her home and pluck out her tail feathers, which takes a few weeks, causing her to be sore. Though she has only one feather left—as before—she now has "enough, because now she is smarter."

The third and final story tells of a rabbit and a bear, who both boast that they are the "best of the beasts", because of the range of their hearing and smelling abilities, respectively. However, they are humbled by a worm who claims he can see all around the world—right back to his own hill, where he sees the rabbit and bear, whom he calls "the two biggest fools that have ever been seen". Then the worm "dived in his hole and went back to his work". 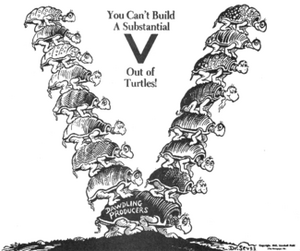 Seuss used similar turtles in an editorial cartoon published in PM on March 20, 1942.

Although Yertle the Turtle and Other Stories has not been directly adapted, several characters from the book have appeared in other media. Yertle is a character in the 1996–1997 television series The Wubbulous World of Dr. Seuss, and in Lynn Ahrens and Stephen Flaherty's Broadway musical Seussical, Yertle serves as a judge and Gertrude McFuzz acts as Horton's love interest. The story was also turned into a dance number in the 1994 film In Search of Dr. Seuss.

Yertle the Turtle and Other Stories is a 1992 animation directed by Ray Messecar and narrated by John Lithgow (later released and cropped to widescreen format on Blu-Ray part of Who's Who in the Dr. Seuss?).

The Red Hot Chili Peppers adapted the story in the song "Yertle the Turtle" on their second album, Freaky Styley, released in 1985.

In 1961 RCA Camden Records released "Yertle the Turtle and Other Stories" with the three stories on the A side and "Bartholomew and the Oobleck" on the B side. The liner notes state "set to dramatic action personally by "Dr. Seuss" with music featuring Marvin Miller".

All content from Kiddle encyclopedia articles (including the article images and facts) can be freely used under Attribution-ShareAlike license, unless stated otherwise. Cite this article:
Yertle the Turtle and Other Stories Facts for Kids. Kiddle Encyclopedia.