Yininmadyemi - Thou didst let fall is a sculptural artwork by Indigenous Australian artist Tony Albert located in Hyde Park, Sydney. Unveiled on 31 March 2015, the artwork acknowledges the service of Aboriginal and Torres Strait Islander men and women in the Australian Defence Force.

The word Yininmadyemi is taken from an indigenous language of Sydney and translates as 'Thou Didst Let Fall'. The translation is sourced from the writings of Second Lieutenant William Dawes who recorded the local language and culture of the Aboriginal people of Sydney in the late 18th century. The sculpture's title is an example of poetic metonymy and is used to enhance the artwork's commemorative purpose.

Yininmadyemi - Thou didst let fall is composed of four seven-metre tall bullets made of painted aluminium, black marble and Corten steel standing beside three fallen shell casings. The bullets and shell casings are arranged upon a crushed granite base that is in the shape of a boomerang. Albert's design for this sculptural memorial is inspired by international memorials such as the Memorial to the Murdered Jews of Europe in Berlin.

The bullets featured in the artwork are modelled on the .303 round, the 'standard small-arms ammunition used by the Australian military in the First and Second World Wars as well as the Korean War'. Albert chose to use the bullet in his design as a universal symbol for conflict and a metaphor for human existence. The arrangement of bullets and shell casings sit atop a boomerang shaped base. The shape of the base recalls the boomerangs that were given by some families to soldiers who left for war as a symbol of hope for their safe return. 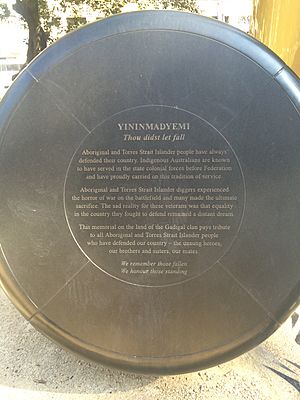 The base of one of the fallen shell casings features an inscription that was written by Albert in collaboration with Indigenous Australian author Anita Heiss. The inscription honours the Aboriginal and Torres Strait Islander servicemen and women who have served in nearly every conflict and peace keeping mission that Australia has participated in since the beginning of the twentieth century. The text also acknowledges the racial discrimination experienced by many Indigenous veterans, whose service was not adequately recognised for many decades.

The design of Yininmadyemi - Thou Didst Let Fall is a symbolic reflection upon the war experience of Albert's grandfather, Eddie Albert, an indigenous soldier who served in the Australian Military in World War Two. During his World War II service, Eddie was captured as a prisoner of war following battle in Libya. The story of Eddie's escape from an Italian POW camp, consequent recapture and survival after three of his fellow Allied soldiers were executed is expressed by the three fallen shells of the sculpture.

The artwork is located in Hyde Park South beside the ANZAC War Memorial, which has served as a major commemorative site since 1934. The location was also chosen due to its status and historical significance for the Gadigal people, one of the clans of the Eora Nation. The site of the artwork has further historical significance as the area was once a 'ritual contest ground, a crossroads for traditional walking trails and an important site for Aboriginal ceremony, gathering and camping'.

The head contractor for the artwork's construction was Cracknell & Longeran Architects Pty Ltd. Hargraves Urban also contributed to the construction of the project.

Although the work itself uses the word "memorial", it is variously described as "public art work, "dramatic sculpture" and "memorial art work". The inherent tension between memorial and artwork has been noted, as has the fact that while some people found it "heavy-handed", others appreciated its "refreshing" acknowledgement of the horrors of war.

All content from Kiddle encyclopedia articles (including the article images and facts) can be freely used under Attribution-ShareAlike license, unless stated otherwise. Cite this article:
Yininmadyemi - Thou didst let fall Facts for Kids. Kiddle Encyclopedia.