Yongala is a small town located in the state of South Australia, Australia. It has a population of approximately 240 people and is situated on the Clare-Peterborough Road (B79), 238 km (148 mi) from Adelaide, the state capital.

Yongala was established as a hundred and part of the Dalhousie county in 1871 as one of the first of the 12 hundreds to be declared in that county. Land could be purchased in a hundred as soon as it had been declared.

The SS Yongala launched in 1903 and owned by the Adelaide Steamship Company was named after the town. It sank in a storm in 1911 off the coast of Townsville, Queensland and its wreck site is protected by the Commonwealth Historic Shipwrecks Act 1976. 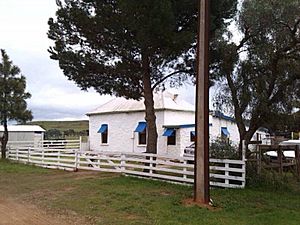 All content from Kiddle encyclopedia articles (including the article images and facts) can be freely used under Attribution-ShareAlike license, unless stated otherwise. Cite this article:
Yongala, South Australia Facts for Kids. Kiddle Encyclopedia.