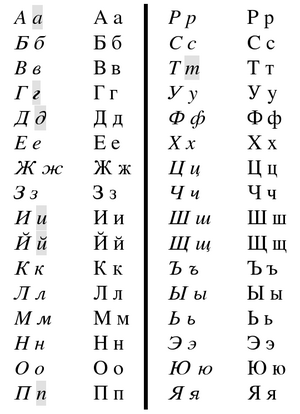 The Cyrillic alphabet is a native Slavic alphabet. Now it is used to write Russian, Ukrainian, Belarusian, Rusyn, Bulgarian, Macedonian and for most South Slavic languages. It was developed in the First Bulgarian Empire during the 10th century and it was required by the Soviet Union for many non-Slavic languages in the Caucasus, Siberia, Central Asia and in Northern Russia to be written in Cyrillic.

During the 18th century, Nikolay Karamzin added the Э, Й and Ё letters.