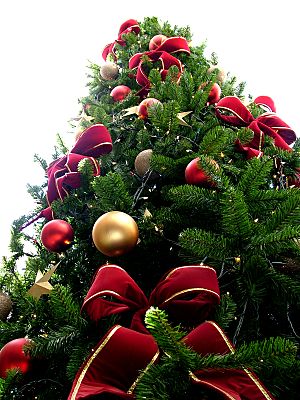 Pagans bring trees in their home and decorate them, showing their love for nature

Yuletide is a pagan holiday also known as the Winter solstice. Generally celebrated by Wiccans and Northern European Christians. "Yuletide" celebrates the birth of the Sun and also celebrates the "Mother" at the height of her "Greatness". Pagans celebrate Yuletide in many ways, most will decorate a "Yuletide" tree, keep it in their homes until most of the leaves fall off then burn the Yule log. Many Wiccans will decorate their alters with Yule colours and items and generally just honour the Goddess. 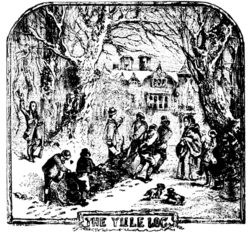 The Christian holiday, Christmas, was created by the Christian Romans based around the polytheistic (many Gods) Sun God festival (Sol Invictis) on the winter solstice, and people in northern Europe combined it with their Yule festival. Yule is celebrated on the 25th of December by most Northern Europeans and the 21st of December, by Wiccans and many non religious groups. For them, Yule is celebrated as the longest night of the year. It is the night when the sun sets earliest and rises latest the next day. The Wiccan ritual includes thanking the Goddess for the past year and asking for a happiness in the year to come.

All content from Kiddle encyclopedia articles (including the article images and facts) can be freely used under Attribution-ShareAlike license, unless stated otherwise. Cite this article:
Yule Facts for Kids. Kiddle Encyclopedia.