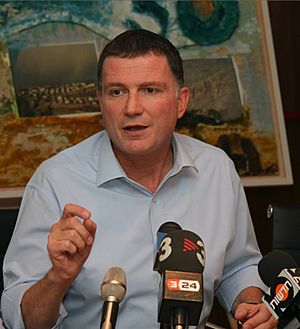 Edelstein was born in western Ukraine. Because of his efforts to emigrate to Israel he was put in Gulag labor camps in Siberia for three years. After this time he made Aliyah (emigrated to Israel) in 1987.

With fellow refusenik Nathan Sharansky he founded the political party of Yisrael BaAliyah ("Israel on the Up") in 1996. The same year he entered the Knesset.

In 2003 Yisrael BaAliyah became part of HaLikud and Edelstein became an MK for this party. In 2006 he lost his seat but in 2007 he returned.

From 2009 to 2013 he was also minister of information and diaspora in the Second Netanyahu Government.

From 2013 to 2020 he was Speaker of the Knesset, succeeding fellow party member Reuven Rivlin and succeeded by Benny Gantz.

Since May 17, 2020 he has been minister of health in the Fifth Netanyahu Government.

Although Edelstein thinks that Israelis and Palestinians can peacefully live together he is negative about the establishment of an independent State of Palestine because he is afraid it will attack Israel.

All content from Kiddle encyclopedia articles (including the article images and facts) can be freely used under Attribution-ShareAlike license, unless stated otherwise. Cite this article:
Yuli Edelstein Facts for Kids. Kiddle Encyclopedia.