Yummy Yummy is the fourth album from the Wiggles; it was released in 1994 by ABC Music distributed by EMI. A companion video was also made in 1994, and it was re-recorded in 1998.

All songs written and composed by (or trad arr. by) M. Cook, J. Fatt, A. Field and G. Page except spoken and listed below.

In the United States, the album reached number 31 on Billboard's Top Heatseekers and number 29 on their Top Independent Albums charts.

Yummy Yummy, released in 1994, is the second video by the Australian children's band the Wiggles. It is the first Wiggles video to feature chroma key backgrounding.

This is the song and skits list for the original 1994 version:

In 2018, the 1994 video version of Yummy Yummy were released in multiple segments on their YouTube channel as Classic Wiggles.

The video was remade and released in 1998 after the theatrical and video releases of The Wiggles Movie and the video release of Wiggly, Wiggly Christmas. Some of the skits such as the short story for Dorothy's Birthday Party were removed. Two new songs, "Pufferbillies" and "Havenu Shalom Alechem", were added. In the North American and UK versions, "Teddy Bear Hug" and "Numbers Rhumba" were replaced by videos featuring the Wiggle Puppets, which are actually from The Dorothy the Dinosaur and Friends Video. The Wiggles use logos on their shirts. Anthony wears a blue shirt instead of a green one. Paul Paddick plays Captain Feathersword. Wags the Dog was also featured in the video. Paul Hester, a former drummer for Split Enz and Crowded House, guest starred as Paul the Cook, and was featured in "Fruit Salad". 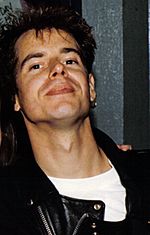 Paul Hester played the chef in the video.

Names are presented in the order of the closing credits.

The young children appearing were:

All content from Kiddle encyclopedia articles (including the article images and facts) can be freely used under Attribution-ShareAlike license, unless stated otherwise. Cite this article:
Yummy Yummy (album) Facts for Kids. Kiddle Encyclopedia.