Zarephath (pronounced ZARRA-fath) is an unincorporated community and census-designated place (CDP) and located in Franklin Township, in Somerset County, New Jersey, United States, about 15 mi (24 km) north of Princeton. As of the 2010 United States Census, Zarephath's population was 37.

It was the communal home of the Pillar of Fire Church, and was the worldwide headquarters of Pillar of Fire International, which comprises the church's college, Somerset Christian College, and radio station WAWZ-FM (the farm and publishing facilities have not been in operation since the late 1970s). It is named after Zarephath, the place in the Bible where the "widow woman" sustained the prophet Elijah. Zarephath was a group of buildings located between the Delaware and Raritan Canal and the Millstone River. Following the flooding in 2011 from Hurricane Irene, the College and all Pillar of Fire ministries were ordered to move out of this floodplain. The entire campus is slated for demolition.

There were 19 households out of which 15.8% had children under the age of 18 living with them, 36.8% were married couples living together, 0.0% had a female householder with no husband present, and 63.2% were non-families. 57.9% of all households were made up of individuals, and 47.4% had someone living alone who was 65 years of age or older. The average household size was 1.95 and the average family size was 3.43. 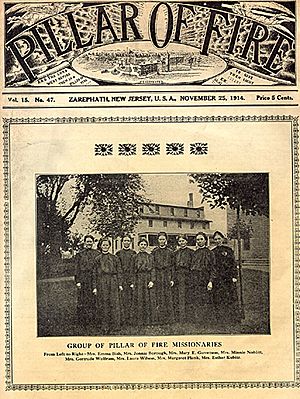 The site was originally a farm owned by Peter Workman Garretson in Franklin Township. He married Caroline Van Neste Field, who became a follower of Alma Bridwell White, then based in Denver, Colorado. Field donated the land to the church after meeting her. The church assumed all debts associated with the mortgage on the property, which were considerable; it was agreed the church would take title to the land upon repayment of the mortgage. Zarephath was named from a phrase in 1 Kings 17, because White saw a parallel with relocation to a farm and the story of Elijah and a widow.

Pillar of Fire International takes its name from a phrase used in Exodus 13:21: "He guided the Israelites on their escape from Egypt by giving them a pillar of fire to light their way across the dark wilderness". It was founded by Alma White in 1901 and originally called the Pentecostal Union. They moved to Franklin Township in 1907 or 1908. The organization is also located in Denver, Colorado. The name was changed from The Pentecostal Union to Pillar of Fire in October 1917 as the group identified as Methodist rather than Pentecostal. It is now known as Pillar of Fire International. The buildings on the grounds were built by members of the Zarephath community, as they stressed self-reliance. They farmed a portion of the 1,000-acre (400 ha) property.

Tropical Storm Doria in 1971 and Hurricane Floyd in September 1999 brought record floods to the areas adjacent to the Millstone River, which is located along one edge of the Zarephath campus. Despite maintaining a twelve-foot-high flood levee, Zarephath was inundated with water from the nearby river and Delaware and Raritan canal. In 1999 the flood crest was a record one, over three feet higher than the previously recorded crest in the river basin. The water level in the Zarephath compound was seven feet at the height of the flood. The church's damage from Floyd was estimated at $2.5 million.

Hurricane Irene destroyed much of the campus again in late August 2011 According to the Somerset Christian College website, authorities have ordered the Zarephath Campus to be abandoned because of its location in the floodplain. The school has since renamed itself Pillar College and located elsewhere in Somerset. It also conducts some classes in Newark.

All content from Kiddle encyclopedia articles (including the article images and facts) can be freely used under Attribution-ShareAlike license, unless stated otherwise. Cite this article:
Zarephath, New Jersey Facts for Kids. Kiddle Encyclopedia.