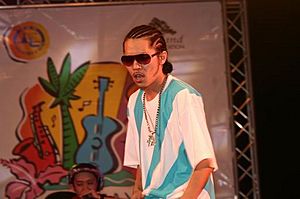 Zeebra (Japanese: ジブラ Jibura, born April 2, 1971 in Tokyo, Japan) is a famous Japanese hip hop artist, who is known as the first rapper in Japan. He was born and raised in Tokyo. He made his first appearance in 1995. Zeebra was a member of the hip-hop group King Giddra, which also included DJ Oasis and K Dub Shine. He became a solo artist in 1997. Because he has been in many TV commercials, started hip-hop television programs, and produced songs for upcoming rappers, Zeebra could be called the father of the Japanese rap scene.

All content from Kiddle encyclopedia articles (including the article images and facts) can be freely used under Attribution-ShareAlike license, unless stated otherwise. Cite this article:
Zeebra Facts for Kids. Kiddle Encyclopedia.