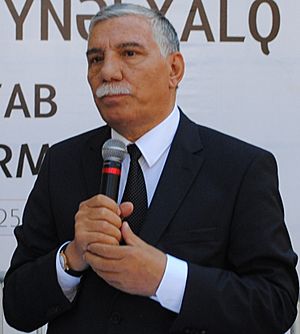 Zelimkhan Yaqub (Azerbaijani: Zəlimxan Yaqub; 21 January 1950 – 9 January 2016) was an Azerbaijani poet. He served as a deputy of the National Assembly of Azerbaijan from 1995 to 2005. He was also named the national poet of Azerbaijan in 2005. He was born in Bolnisi Municipality, Georgian SSR, Soviet Union.

All content from Kiddle encyclopedia articles (including the article images and facts) can be freely used under Attribution-ShareAlike license, unless stated otherwise. Cite this article:
Zelimkhan Yaqub Facts for Kids. Kiddle Encyclopedia.