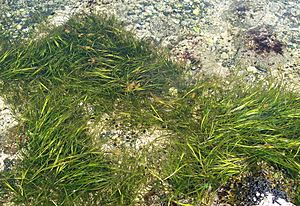 Zostera is a small genus of widely distributed seagrasses, commonly called marine eelgrass or simply eelgrass and also known as seaweed by some fishermen and recreational boaters including yachtsmen. The genus Zostera contains 15 species.

Zostera marina is found on sandy substrates or in estuaries, usually submerged or partially floating. Most Zostera are perennial. They have long, bright green, ribbon-like leaves, the width of which are about 1 centimetre (0.4 in). Short stems grow up from extensive, white branching rhizomes. The flowers are enclosed in the sheaths of the leaf bases; the fruits are bladdery and can float.

Zostera beds are important for sediment deposition, substrate stabilization, as substrate for epiphytic algae and micro-invertebrates, and as nursery grounds for many species of economically important fish and shellfish. Zostera often forms beds in bay mud in the estuarine setting. It is an important food for brant geese and wigeons, and even (occasionally) caterpillars of the grass moth Dolicharthria punctalis.

The slime mold Labyrinthula zosterae can cause the wasting disease of Zostera, with Z. marina being particularly susceptible, causing a decrease in the populations of the fauna that depend on Zostera.

The genus as a whole is widespread throughout seashores of much of the Northern Hemisphere as well as Australia, New Zealand, Southeast Asia and southern Africa. The discovery of Z. chilensis in 2005 adds an isolated population on the Pacific coast of South America to the distribution. One species (Z. noltii) occurs along the land-locked Caspian Sea.

Eelgrass has been used for food by the Seri tribe of Native Americans on the coast of Sonora, Mexico. The rhizomes and leaf-bases of eelgrass were eaten fresh or dried into cakes for winter food. It was also used for smoking deer meat. The Seri language has many words related to eelgrass and eelgrass-harvesting. The month of April is called xnoois ihaat iizax, literally "the month when the eelgrass seed is mature".

Zostera has also been used as packing material and as stuffing for mattresses and cushions.

On the Danish island of Læsø it has been used for thatching roofs. Roofs of eelgrass are said to be heavy, but also much longer-lasting and easier to thatch and maintain than roofs done with more conventional thatching material. More recently, the plant has been used in its dried form for insulation in eco-friendly houses and as a ground cover in permaculture gardens, once its salt layer washed off (ex: Friland, Danish eco-village)

All content from Kiddle encyclopedia articles (including the article images and facts) can be freely used under Attribution-ShareAlike license, unless stated otherwise. Cite this article:
Zostera Facts for Kids. Kiddle Encyclopedia.