Zverino Island (Bulgarian: остров Зверино) is the largest and westernmost island in the Meade group lying in the north entrance to McFarlane Strait in the South Shetland Islands, Antarctica. It is extending 1.2 km (0.75 mi) by 700 m (2,300 ft), with surface area of 48 hectares (120 acres), and is snow-free in summer.

The island is named after the settlement of Zverino in Western Bulgaria. 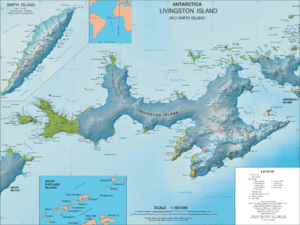 All content from Kiddle encyclopedia articles (including the article images and facts) can be freely used under Attribution-ShareAlike license, unless stated otherwise. Cite this article:
Zverino Island Facts for Kids. Kiddle Encyclopedia.