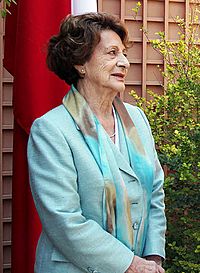 Ángela Margarita Jeria Gómez (22 August 1926 – 2 July 2020) was a Chilean archaeologist and human rights activist. She was born in Talca, Chile. She was the mother of the President of Chile Michelle Bachelet. She was the wife of the Brigadier-general of the Chilean Air Force Alberto Bachelet. Jeria was known as the first lady during her daughter's the first government because she was not married.

All content from Kiddle encyclopedia articles (including the article images and facts) can be freely used under Attribution-ShareAlike license, unless stated otherwise. Cite this article:
Ángela Jeria Facts for Kids. Kiddle Encyclopedia.