Events of the Ōnin era 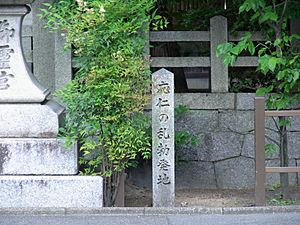 Stone marker for the Ōnin War

In the Ōnin era, the emperor gave Yoshimasa's villa with a special name -- Higashiyama-dono., Construction work was interrupted by the Ōnin War.

The Ōnin War started in 1467. This conflict is called Ōnin no ran because of the nengō in which it began. The fighting began as a dispute over who should follow Ashikaga Yoshimasa as shogun after his retirement – whether it would be his brother (Yoshimi) or his son (Yoshihisa).

Rival groups of daimyo fought for military supremacy. In the end, there was no winner. The war stopped because the factions simply exhausted themselves.

All content from Kiddle encyclopedia articles (including the article images and facts) can be freely used under Attribution-ShareAlike license, unless stated otherwise. Cite this article:
Ōnin Facts for Kids. Kiddle Encyclopedia.