In Christchurch, about 100 kilometres (62 mi) southeast of the epicentre, shaking lasted for 40 to 50 seconds. The magnitude of the earthquake is estimated to be in the range 7.0–7.3. Severe damage to farm buildings in the epicentral region was reported and the top 7.8 metres (26 ft) of the spire of ChristChurch Cathedral collapsed. It was the first earthquake observed to be associated with mainly horizontal fault displacement. 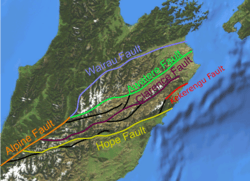 New Zealand lies along the boundary between the Australian and Pacific plates.

The earthquake occurred on the Hope Fault, one of the group of dextral strike-slip structures known as the Marlborough Fault System that transfer displacement between the mainly transform and convergent type plate boundaries in a complex zone at the northern end of South Island. Alexander McKay, a geologist working for the geological survey, observed horizontal offsets in farm fences between 1.5 and 2.6 metres (4.9 and 8.5 ft) along the fault. He was the first to associate a strike-slip displacement with an earthquake. 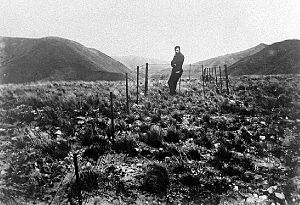 This surveyor stands at a fence that crosses the Hope Fault near Glynn Wye Station. The fence, originally straight, has been kinked by the sideways movement of the land.

In the North Canterbury region many buildings were severely damaged, particularly in the Hope Valley and Hanmer areas. Landslides occurred in unconsolidated sediment and fissures up to 30 centimetres (12 in) wide were observed.

In Christchurch, the top 7.8 metres (26 ft) of the Cathedral spire fell down and minor damage, such as broken chimneys, affected many houses. The Durham Street Methodist Church, Christchurch's first church build with permanent materials, suffered some damage to its stonework. Another building affected was the Christchurch Normal School, where chimneys fell down and ceilings were cracked.

Damage was greatest in the northern and northwestern suburbs, probably due to the peaty sub-soil.

All content from Kiddle encyclopedia articles (including the article images and facts) can be freely used under Attribution-ShareAlike license, unless stated otherwise. Cite this article:
1888 North Canterbury earthquake Facts for Kids. Kiddle Encyclopedia.