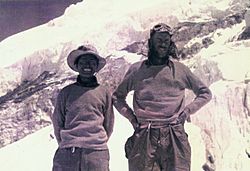 The British Mount Everest expedition of 1953 was the first expedition that made it to the summit of Mt. Everest. Edmund Hillary, an explorer, and Tenzing Norgay, a Nepalese mountain climber, were the pair who got to the top. It was the ninth attempt to reach the summit.

The expedition was lead by Colonel John Hunt, who was hired by the Everest organizing committee. The military-style expedition was "bottom heavy" by today's standards. There were tons of equipment hauled by 350 porters to support only ten climbers. Other teams would also try. Finally, on May 29, Hillary and Tenzing made it to the top. They could only stay on the summit for 15 minutes or risk running out of oxygen. They began the long climb back down to the base camp. They arrived exhausted and unable to speak. When Hunt saw them he thought they failed and began arranging for another team to try. But the two gestured that the climb had been a success. Hillary and Norgay became instant heroes.

All content from Kiddle encyclopedia articles (including the article images and facts) can be freely used under Attribution-ShareAlike license, unless stated otherwise. Cite this article:
1953 British Mount Everest expedition Facts for Kids. Kiddle Encyclopedia.