Kids Encyclopedia Facts
Not to be confused with 1 New York Place.

1 New York Plaza is an office building in the Financial District of Manhattan in New York City, at the intersection of South and Whitehall Streets near South Ferry. The building, measuring 640 feet (200 m) tall with 50 floors, is the southernmost skyscraper in Lower Manhattan. It was designed by William Lescaze & Assocs. and Kahn & Jacobs, and developed by Sol Atlas and John P. McGrath.

The facade was designed by Nevio Maggiora, consisting of a boxlike "beehive" pattern with the windows recessed within, made of aluminum-clad wall elements resembling a type of thermally activated elevator button popular at the time of construction. There is a 40,000 square feet (3,700 m2) retail concourse on the lower level.

In 1959, the City of New York attempted to acquire the land under this development through eminent domain as part of the Battery Park Urban Renewal Area. The plan involved consolidating several blocks into a "superblock" for public housing. When that plan fell through, the city hoped to entice the New York Stock Exchange to relocate to the property. However, the owner of the property—the firm of Atlas McGrath—successfully sued to retain their land, claiming they were more than willing to develop the site privately.

Shortly after groundbreaking, Chase Manhattan Bank signed a 30-year, $200 million lease for 1.062 million square feet (98,700 m2) of space across 22 floors in the building. Investment bank Salomon Brothers was another early tenants, moving into the building in 1970. On August 5, 1970, the building suffered a fire in which two people were killed and 35 injured. The deaths were caused after an occupied elevator was "summoned" to the burning floor when one of the thermally-activated call buttons—designed to react to a warm finger tapping it—reacted instead to the heat of the fire on that floor. 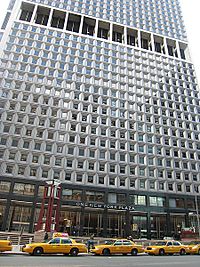 In 1989, Chase purchased the building for $140 million. However, in 1991 Chase moved much of its staff from the building to MetroTech Center in Downtown Brooklyn and Salomon Brothers left for 7 World Trade Center. With the additional loss of Thomson & McKinnon, which had declared bankruptcy, 1.7 million square feet (160,000 m2) of the building were vacant.

Chase renovated the building in the early 1990s, spending $50 million to improve the lobby, elevator cabs and plaza and an additional $50 million on asbestos removal. Shortly afterward, Prudential Securities signed a lease for over 1 million square feet (93,000 m2) of space in the building. The company received at least $106 million in tax breaks and incentives for the move and invested over $147 million in the space to build a data center, trading floor and special generators to ensure power to the building.

In 2003, Prudential Securities was acquired by Wachovia causing the combined company to offer all 1.3 million square feet (120,000 m2) of its space in the building for sublease. Morgan Stanley signed a lease for 648,000 square feet (60,200 m2) of Prudential's former office space in June 2005. The company committed to moving 2,300 employees to the building and received $11 million in tax incentives from New York State. Around the same time, the law firm Fried Frank renewed their 380,000 square feet (35,000 m2) space on the building's 22nd-30th floors.

In April 2012, Morgan Stanley expanded to 1.153 million square feet (107,100 m2) of space in a lease that runs through 2029. The new space was formerly occupied by Goldman Sachs until it consolidated into the recently completed 200 West Street in 2011. After the expansion, the building was about 85% occupied.

In October 2012, the building was heavily damaged by Hurricane Sandy when an estimated 28 million US gallons (110,000 kl) of water flooded the lower levels of the building. The retail concourse was submerged and needed to be completely gut-renovated. Office tenants were allowed to return starting November 17, 2012, and the retail concourse reopened in the winter of 2014.

The building's retail concourse reopened in the winter of 2015 after a three year, $14 million redesign. New tenants in the space included Starbucks, Chipotle Mexican Grill, Chopt, and Gateway Newstands.

In March 2016, Wells Fargo provided a $750 million mortgage on the building. Two months later, the China Investment Corporation sovereign wealth fund paid $700 million for a 49% stake in the building from Brookfield, valuing the property at over $1.4 billion. At the end of the year, AEW Capital Management acquired a roughly 15% stake from Brookfield for $232.2 million at the same $1.4 billion valuation.

All content from Kiddle encyclopedia articles (including the article images and facts) can be freely used under Attribution-ShareAlike license, unless stated otherwise. Cite this article:
1 New York Plaza Facts for Kids. Kiddle Encyclopedia.