Kids Encyclopedia Facts
This page is about the toy. For other uses, see 2XL.

2-XL (2-XL Robot, 2XL Robot, 2-XL Toy) is an educational toy robot that was marketed from 1978–1981 by the Mego Corporation, and from 1992–1995 by Tiger Electronics. 2-XL was the first "smart-toy" in that it exhibited rudimentary intelligence, memory, gameplay, and responsiveness. 2-XL was infused with a "personality" that kept kids focused and challenged as they interacted with the verbal robot. Learning was enhanced via the use of jokes and funny sayings as verbal reinforcements for performance. 2-XL was heralded as an important step in the development of toys, particularly educational ones. 2-XL won many awards, and Playthings, a toy industry magazine, placed 2-XL on its 75th anniversary cover as one of the industry's top-ten toys of all time. The 2-XL name is a pun of the phrase "To Excel". 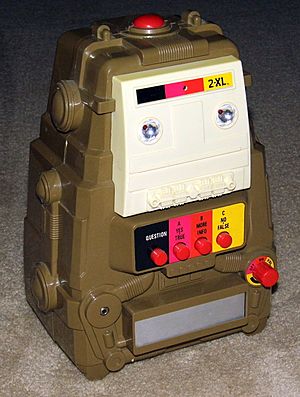 The original version, created by Mego Corporation, was made of brown plastic with white plastic found on the anterior face of the robot. It had two red light bulbs for the eyes. These bulbs also flashed at moments while 8-track cartridge tape programs played. It had four red buttons on its stomach with designated options for answers to questions asked by the toy, such as "Question," "A or Yes Or True," "B or More Info," and "C or No or False. A knob is also found on the lower right portion of the toy which controlled its volume and power. The "mouth" was reused detail molding taken from the Micronauts Battle Cruiser. At the bottom was a large slot for the 8-track cartridge tapes.

This particular version was essentially a regular 8-track tape player, but by utilizing unique, clever, and patented mathematical decision tree programming methods, over 20 interactive modes of operation were achieved. It seemed to most people like a computer which had enough information and interactive questions to entertain and educate a child (or adult) up to two hours. Subjects included sports quiz, Guinness Book of World Records, the metric system, general information and jokes.

The mold and look got a minor change in 1980. The eye lights became red and responded to the voice. The flashing lights also became brighter, and the speaker in the back of the unit was changed from a hexagon shape to a more traditional round. The plastic was glossier looking. 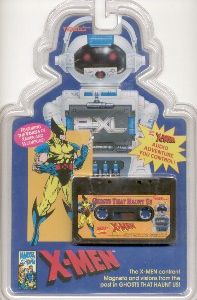 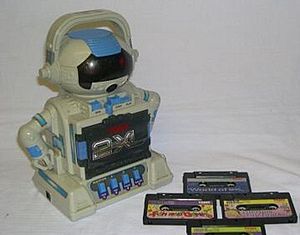 Tiger Electronics re-introduced 2-XL in 1992. Instead of using 8-track cartridge tapes, this version used cassette tapes that were twice the length of the tapes in the previous version and had a better sound quality. Freeman again recorded the 2-XL voice for the cassette tapes in a professional sound studio. In addition to eyes that would light up the toy now sported a circle for a mouth that could light up as the machine talked. The toy could now run on batteries and had a headphone jack. Instead of the buttons simply switching tracks on the 8-track tape as in the old version, the cassette version took advantage of the fact that a cassette has a total of four tracks - one for the left and right channel on each side. The tape head in the player could play any of the four parallel tracks, based on which button was pressed. Playing a 2-XL tape in a standard tape player would result in different audio on the left and right channels, and if the reverse side was played, one would hear the other two tracks played in reverse. Using all four tracks simultaneously was unique to 2-XL and provided the basis for the interactive give and take.

As with the previous version, this version could play any standard tape of similar tape, but the user needed to first push the "Question" button (or the "2/A/No" button would work as well, playing the correct channel). Pressing three or four buttons would play one of the channels on the reverse side of the tape backwards.

Newly released tapes were branded with comic book and cartoon characters, including Spider-Man, Star Trek: The Next Generation, Mighty Morphin Power Rangers, X-Men and Batman. 2-XL games would allow the user to go on an adventure with various superheroes, deciding their fate by pushing one of the buttons. The second version was on the market from 1992 through 1996, and about 45 tapes were released in total. The toy was sold internationally, including in Japan, Germany, Hungary, Italy, France, UK, Ireland, Canada, Brazil (where it was distributed by Nintendo's official local licenser Playtronic) and others. The tapes were translated into many foreign languages, but were not recorded by Freeman.

The toy's success was also the basis for a game show called Pick Your Brain produced by Marc Summers Productions and Summit Media Group. The 2-XL robot in the show served as the assistant of Marc Summers. 2-XL was also a spokesrobot for basketball player Michael Jordan and his charitable foundation in 1992 and 1993 and appeared in a number of PSA (public service announcements) with Jordan.

General Information was included with each toy robot. The remainder programs were each sold separately:

The World of 2-XL was sold with each toy robot. The remainder programs were each sold separately:

One of the last tapes released for the Mego Corporation version of 2XL was "Trilex", a complete board game designed to be played against 2XL. The tape came with a board which fitted over the front of the 2XL unit itself, with the board in front of the tape slot. The game board consisted of an inverted pyramid shape, 4 squares wide at the top to 1 square at the bottom, with each row colored in a different color (Blue, Yellow, Green, and Tan), and 4 slots through which pieces (which 2XL called "checkers") could be dropped into the pyramid. The slots aligned with 2XL's 4 buttons, with the intention that dropping the checker would also press the appropriate track button on 2XL. The objective of the game was to create either a line or a triangle of three checkers of a selected color. The game and tape design are interesting because they enabled the 4-track tape player to provide a passable simulation of a game-playing AI.

A number of secondary products were licensed under the 2-XL (2XL) name including: laptop computer bags, earphones, lunch boxes and more.

During its time, both iterations of 2-XL won hundreds of awards, including FamilyFun magazine's award for best toy of 1992, and Right Start Magazine's honor as Europe's best toy in the 3-5 year-old category for 1993. For the 75th anniversary issue of Playthings magazine, 2-XL was featured on the cover and named one of the top ten toys of all time. The Tiger 2-XL was also the winner of the 1992 Walt Disney Company Best Learning Toy for 1992.

All content from Kiddle encyclopedia articles (including the article images and facts) can be freely used under Attribution-ShareAlike license, unless stated otherwise. Cite this article:
2-XL Facts for Kids. Kiddle Encyclopedia.