The 2012 Stanley Cup Finals was the championship series of the National Hockey League (NHL) 2011–12.

Years in boldface under the "Finals appearance" column mean that the player won the Stanley Cup in the given year. 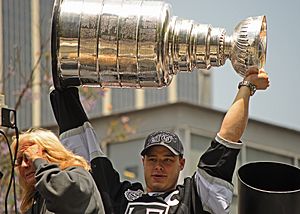 Dustin Brown with the Stanley Cup

All content from Kiddle encyclopedia articles (including the article images and facts) can be freely used under Attribution-ShareAlike license, unless stated otherwise. Cite this article:
2012 Stanley Cup Finals Facts for Kids. Kiddle Encyclopedia.