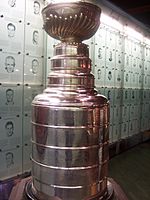 This is a list of Stanley Cup champions, including finalists and challengers. The Stanley Cup, donated by former Governor General of Canada Lord Stanley of Preston in 1892, is the oldest professional sports trophy in North America. Originally inscribed the Dominion Hockey Challenge Cup, the trophy started out as an award for Canada's top-ranking amateur ice hockey club. Today, it is awarded to the top team in the National Hockey League, a professional ice hockey league.

B. Intended to be a best-of-three series, Ottawa Capitals withdrew their challenge after the first game.

C. The January 31 (a Saturday) game was tied 2–2 at midnight and the Mayor of Westmount refused to allow play to continue on the Sunday. The game was played on February 2 (a Monday) and the January 31 game was considered to be void.

D. For most of 1904, the Ottawa Senators were not affiliated with any league.

E. The Montreal Wanderers were disqualified as the result of a dispute. After game one ended tied at the end of regulation, 5–5, the Wanderers refused to play overtime with the current referee, and then subsequently refused to play the next game of the series in Ottawa.

The Conn Smythe Trophy is awarded to the player who is judged to be the most valuable player to his team during the playoffs. It was first awarded during the 1964–65 playoffs.

All content from Kiddle encyclopedia articles (including the article images and facts) can be freely used under Attribution-ShareAlike license, unless stated otherwise. Cite this article:
List of Stanley Cup champions Facts for Kids. Kiddle Encyclopedia.