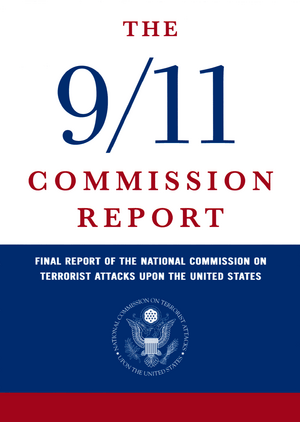 The cover of the final 9/11 Commission Report

The 9/11 Commission Report, formally named Final Report of the National Commission on Terrorist Attacks Upon the United States, is the official report of the events leading up to the September 11, 2001 terrorist attacks.

It was prepared by the National Commission on Terrorist Attacks Upon the United States (informally sometimes known as the "9/11 Commission" or the "Kean/Hamilton Commission") at the request of United States president George W. Bush and Congress. It is available to the public for sale or free download.

After releasing the report, commission chair Thomas Kean declared that both Presidents Bill Clinton and George W. Bush were "not well served" by the FBI and CIA.

All content from Kiddle encyclopedia articles (including the article images and facts) can be freely used under Attribution-ShareAlike license, unless stated otherwise. Cite this article:
9/11 Commission Report Facts for Kids. Kiddle Encyclopedia.