A Wizard of Earthsea facts for kids

A Wizard of Earthsea is a fantasy novel written by American author Ursula K. Le Guin and first published by the small press Parnassus in 1968. It is regarded as a classic of children's literature, and of fantasy, within which it was widely influential.

The story is set in the fictional archipelago of Earthsea and centers on a young mage named Ged, born in a village on the island of Gont. He displays great power while still a boy and joins the school of wizardry, where his prickly nature drives him into conflict with one of his fellows. During a magical duel, Ged's spell goes awry and releases a shadow creature that attacks him. The novel follows his journey as he seeks to be free of the creature.

The book has often been described as a coming-of-age story, as it explores Ged's process of learning to cope with power and come to terms with death. The novel also carries Taoist themes about a fundamental balance in the universe of Earthsea, which wizards are supposed to maintain, closely tied to the idea that language and names have power to affect the material world and alter this balance.

A Wizard of Earthsea received highly positive reviews, initially as a work for children and later among a general audience as well. It won the Boston Globe–Horn Book Award in 1969 and was one of the final recipients of the Lewis Carroll Shelf Award in 1979. Margaret Atwood called it one of the "wellsprings" of fantasy literature.

George Slusser described the series as a "work of high style and imagination", while Amanda Craig said that A Wizard of Earthsea was "the most thrilling, wise, and beautiful children's novel ever". 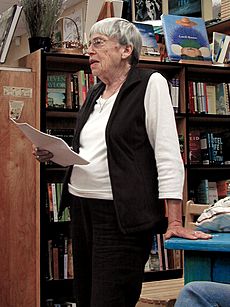 Early concepts for the Earthsea setting were developed in two short stories, "The Rule of Names" (1964) and "The Word of Unbinding" (1964), both published in Fantastic. The stories were later collected in Le Guin's anthology The Wind's Twelve Quarters (1975).

Earthsea was also used as the setting for a story Le Guin wrote in 1965 or 1966, which was never published.

The short stories published in 1964 introduced the world of Earthsea and important concepts in it, such as Le Guin's treatment of magic.

"Only in silence the word,
only in dark the light,
only in dying life:
bright the hawk's flight
on the empty sky."

From the Creation of Éa, with which A Wizard of Earthsea begins.

Earthsea itself is an archipelago or group of islands. In the fictional history of this world, the islands were raised from the ocean by Segoy, an ancient deity or hero. The world is inhabited by both humans and dragons, and several among the humans are sorcerers or wizards. The world is shown as being based on a delicate balance, which most of its inhabitants are aware of, but which is disrupted by somebody in each of the original trilogy of novels. The setting of Earthsea is preindustrial, and has many cultures within the widespread archipelago. Most of the characters of the story are of the Hardic peoples, who are dark-skinned, and who populate most of the islands. Some of the Eastern islands are populated by the white-skinned Kargish people, who see the Hardic folk as evil sorcerers: the Kargish, in turn, are viewed by the Hardic as barbarians. The far western regions of the archipelago are where the dragons live.

The novel follows a young boy called Duny, nicknamed "Sparrowhawk", born on the island of Gont. Discovering that the boy has great innate power, his aunt teaches him the little magic she knows. When his village is attacked by Kargish raiders, Duny summons a fog to conceal the village and its inhabitants, enabling the residents to drive off the Kargs. Hearing of this, the powerful mage Ogion takes him as an apprentice, giving him his "true name"—Ged. Ogion tries to teach Ged about the "equilibrium", the concept that magic can upset the natural order of the world if used improperly. In an attempt to impress a girl, however, Ged searches Ogion's spell books and inadvertently summons a strange shadow, which has to be banished by Ogion. Sensing Ged's eagerness to act and impatience with his slow teaching methods, Ogion sends him to the renowned school for wizards on the island of Roke.

At the school, Ged's skills inspire admiration even among the teachers. He is befriended by an older student named Vetch, but generally remains aloof from his fellows. Another student, Jasper, acts condescendingly towards Ged and provokes the latter's proud nature. After Jasper needles Ged during a feast, Ged challenges him to a duel of magic. Ged casts a powerful spell intended to raise the spirit of a legendary dead woman, but the spell goes awry and instead releases a shadow creature, which attacks him and scars his face. The Archmage Nemmerle drives the shadow away, but at the cost of his life.

Ged spends many months healing before resuming his studies. The new Archmage, Gensher, describes the shadow as an ancient evil that wishes to possess Ged, and warns him that the creature has no name. Ged eventually receives his wizard's staff, and takes up residence in the Ninety Isles, providing the poor villagers protection from the dragons that have seized and taken up residence on the nearby island of Pendor, but discovers that he is still being sought by the shadow. Knowing that he cannot guard against both threats at the same time, he sails to Pendor and gambles his life on a guess of the adult dragon's true name. When he is proved right, the dragon offers to tell him the name of the shadow, but Ged instead extracts a promise that the dragon and his offspring will never threaten the archipelago.

Chased by the shadow, Ged flees to Osskil, having heard of the stone of the Terrenon. He is attacked by the shadow, and barely escapes into the Court of Terrenon. Serret, the lady of the castle, shows him the stone, and urges Ged to speak to it, claiming it can give him limitless knowledge and power. Recognizing that the stone harbors one of the Old Powers—ancient, powerful, malevolent beings—Ged refuses. He flees and is pursued by the stone's minions, but transforms into a swift falcon and escapes.

Ged flies back to Ogion on Gont. Unlike Gensher, Ogion insists that all creatures have a name and advises Ged to confront the shadow. Ogion is proved right; when Ged seeks out the shadow, it flees from him. Ged pursues it in a small sailboat, until it lures him into a fog where the boat is wrecked on a reef. Ged recovers with the help of an elderly couple marooned on a small island since they were children; the woman gives Ged part of a broken bracelet as a gift. Ged patches his boat and resumes his pursuit of the creature into the East Reach. On the island of Iffish, he meets his friend Vetch, who insists on joining him. They journey east far beyond the last known lands before they finally come upon the shadow. Naming it with his own name, Ged merges with it and joyfully tells Vetch he is healed and whole. 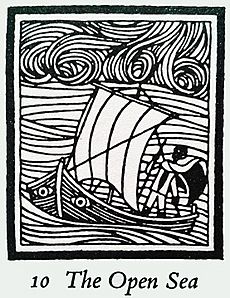 Illustration by Ruth Robbins for Chapter 10

The first edition of the book, published in 1968, was illustrated by Ruth Robbins. The cover illustration was in color, and the interior of the book contained a map of the archipelago of Earthsea. In addition, each chapter had a black-and-white illustration by Robbins, similar to a woodcut image. The images represented topics from each chapter; for instance, the very first image depicted the island of Gont, while the illustration for the chapter "The Dragon of Pendor" pictured a flying dragon. The image shown here depicts Ged sailing in his boat Lookfar, and was used in the 10th chapter, "The Open Sea", in which Ged and Vetch travel from Iffish eastward past all known lands to confront the shadow creature.

A condensed, illustrated version of the first chapter was printed by World Book in the third volume of Childcraft in 1989. Multiple audio versions of the book have been released. BBC Radio produced a radioplay version in 1996 narrated by Judi Dench, and a six-part series adapting the Earthsea novels in 2015, broadcast on Radio 4 Extra. In 2011, the work was produced as an unabridged recording performed by Robert Inglis.

Two screen adaptations of the story have also been produced. An original mini-series titled Legend of Earthsea was broadcast in 2004 on the Sci Fi Channel. It is based very loosely on A Wizard of Earthsea and The Tombs of Atuan. In an article published in Salon, Le Guin expressed strong displeasure at the result. She stated that by casting a "petulant white kid" as Ged (who has red-brown skin in the book) the series "whitewashed Earthsea", and had ignored her choice to write the story of a non-white character, a choice she said was central to the book. This sentiment was shared by a review in The Ultimate Encyclopedia of Fantasy, which said that Legend of Earthsea "totally missed the point" of Le Guin's novels, "ripping out all the subtlety, nuance and beauty of the books and inserting boring cliches, painful stereotypes and a very unwelcome 'epic' war in their place".

Studio Ghibli released an adaptation of the series in 2006 titled Tales from Earthsea. The film very loosely combines elements of the first, third, and fourth books into a new story.

All content from Kiddle encyclopedia articles (including the article images and facts) can be freely used under Attribution-ShareAlike license, unless stated otherwise. Cite this article:
A Wizard of Earthsea Facts for Kids. Kiddle Encyclopedia.