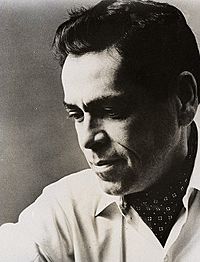 Abbey Simon (January 8, 1922 – December 18, 2019) was an American concert pianist, teacher, and recording artist. He was a student of Josef Hofmann at the Curtis Institute of Music. He was the winner of the Naumburg International Piano Competition in 1940. He was called a "supervirtuoso" by the New York Times.

Simon was born in New York City, New York. He studied at Curtis Institute of Music in Philadelphia, Pennsylvania. His career began in 1940. Simon died in Geneva on December 18, 2019 at the age of 99.

All content from Kiddle encyclopedia articles (including the article images and facts) can be freely used under Attribution-ShareAlike license, unless stated otherwise. Cite this article:
Abbey Simon Facts for Kids. Kiddle Encyclopedia.