Abel Stearns (February 9, 1798 – August 23, 1871) was a trader who came to the Pueblo de Los Angeles, Alta California in 1829 and became a major landowner, cattle rancher and one of the area's wealthiest citizens.

Stearns was born in Lunenburg, Massachusetts, the son of Elizabeth (née Goodrich) and Levi Stearns, a farmer. His parents were both from families that came from England in the 1600s. Stearns went to Mexico in about 1826, where he became a naturalized citizen.

In 1829, Stearns emigrated to Monterey, California, then settled in the Pueblo de los Ángeles, present day Los Angeles, California. He obtained a government concession to build a warehouse at San Pedro, the nearest seaport. Later, he established a stagecoach route connecting San Pedro Bay with the Los Angeles pueblo. In 1831, he built a three-story flour mill on North Spring Street, Los Angeles. Soon, Stearns became one of the most prominent and influential citizens of the pueblo.

In 1842 Stearns bought his first rancho, the 28,000-acre (110 km2) Rancho Los Alamitos between Los Angeles and the harbor. A drought occurred between 1862 and 1864 which was said to have resulted in the death of 50,000 cattle on Stearns land alone. Stearns mortgaged the rancho to Michael Reese, who then purchased it at a sheriff's sale. Reese's estate was then sold to John W. Bixby and Isaias W. Hellman, a founder of the Farmers and Merchants Bank.

In 1842 Stearns made the first shipment to the U.S. Mint of California gold on record. On July 8, 1843, his package of 1,843 ounces of placer gold valued at $19 an ounce was deposited in the Philadelphia Mint by Alfred Robinson.

Following the Mexican-American War, Stearns represented Los Angeles to the US military government of California, 1848–1850. He was a delegate to the 1849 California Constitutional Convention, representing the district of Los Angeles. Later he was California State Assemblyman, and a Los Angeles County Supervisor and a member of the Los Angeles Common Council, the legislative branch of the city government. 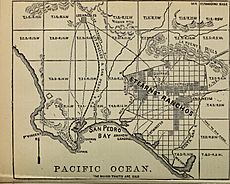 By 1860, Stearns was the most important land owner in Southern California, and owned Rancho La Habra, Rancho Los Coyotes, Rancho San Juan Cajón de Santa Ana, Rancho Las Bolsas, Rancho La Bolsa Chica, Rancho Jurupa and Rancho La Sierra (Sepulveda). Stearns was hit hard by the drought of 1863–64, causing the loss of thousands of cattle. By 1868 Stearns had suffered such financial reverses that he mortgaged all his ranch assets in what were then Los Angeles and San Bernardino counties.

To obtain the necessary operating capital, he formed a real estate sales partnership, with Alfred Robinson and four San Francisco investors; Samuel Brannan, E. F. Northam, Charles B. Polhemus, and Edward Martin; that became known as the Robinson Trust in 1868. He turned over 177,796 acres (720 km2) to the Trust, including all but one of his ranchos.

The era of the large cattle ranchos was waning. In its place came agriculture, as ranchos were broken up and generally sold in 40-acre (160,000 m2) farms and ranches. The Robinson Trust acted as sales agents for the subdivisions. To gain maximum coverage for their campaign, they linked themselves to the California Immigrant Union and helped guide that organization's sales pitches.

Despite considerable friction between Stearns and the other members of the trust, the Robinson Trust succeeded. By 1870 Stearns had escaped the debts incurred by the drought of the 1860s and was on his way to accumulating another fortune.

Stearns was nicknamed "Cara de Caballo" (Horse Face) because of his long-jawed countenance. In 1841, he married Arcadia Bandini of the wealthy Bandini family. They lived and entertained at their Los Angeles home, the historic Don Abel Stearns House. Stearns died on August 23, 1871, at age 72 in the Grand Hotel, San Francisco, California, and is interred at Calvary Cemetery, Los Angeles.

All content from Kiddle encyclopedia articles (including the article images and facts) can be freely used under Attribution-ShareAlike license, unless stated otherwise. Cite this article:
Abel Stearns Facts for Kids. Kiddle Encyclopedia.