Aberfan is a former coal mining village in the Taff Valley 4 miles (6 km) south of the town of Merthyr Tydfil, Wales.

On 21 October 1966, it became known for the Aberfan disaster, when a colliery spoil tip collapsed into homes and a school, killing 116 children and 28 adults.

Aberfan is situated toward the bottom of the western valley slope of the river River Taff, on the eastern slope of Mynydd Merthyr hill, about four miles (6 km) south of the town Merthyr Tydfil. The Taff runs north-to-south through the village; at the upper side of the settlement, on the western outskirts, a disused Glamorganshire Canal bed and a railway embankment run parallel to the river.

Aberfan consisted of two cottages and an inn frequented by local farmers and bargemen until 23 August 1869, when John Nixon and his partners started the Merthyr Vale Colliery.

Between 1952 and 1965, with mountains denuded there was severe flooding in the Pantglas area of Aberfan on at least 11 occasions. By 1966 the population had grown to approximately 5,000, most of whom were employed in the coal industry.

For many years, millions of cubic metres of excavated mining debris from the colliery were deposited on the side of Mynydd Merthyr, directly above the village of Aberfan on the opposite side of the valley. Huge piles, or "tips", of loose rock and mining spoil had been built up over a layer of highly porous sandstone that contained numerous underground springs, and several tips had been built up directly over these springs. Although local authorities had raised specific concerns in 1963 about spoil being tipped on the mountain above the village primary school, these were largely ignored by the National Coal Board's area management.

Early on the morning of Friday, 21 October 1966, after several days of heavy rain, a subsidence of about 3–6 metres occurred on the upper flank of colliery waste tip No. 7. At 9:15 a.m. more than 150,000 cubic metres of water-saturated debris broke away and flowed downhill at high speed. A mass of over 40,000 cubic metres of debris slid into the village in a slurry 12 metres (39 ft) deep.

The slide destroyed a farm and twenty terraced houses along Moy Road, and struck the northern side of the Pantglas Junior School and part of the separate senior school, demolishing most of the structures and filling the classrooms with thick mud and rubble up to 10 metres (33 ft) deep. Mud and water from the slide flooded many other houses in the vicinity, forcing many villagers to evacuate their homes. 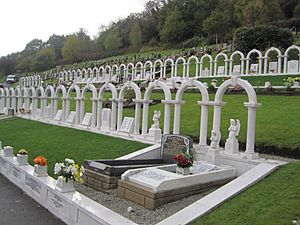 White arches in Bryntaf Cemetery, Aberfan mark the graves of children killed in the disaster 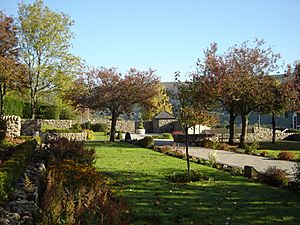 Aberfan Memorial Garden on the site of the children's school

The Queen and Prince Philip visited Aberfan on 29 October 1966.

After the disaster the Mayor of Merthyr immediately launched a Disaster Fund to aid the village and the bereaved. By the time the Fund closed in January 1967, nearly 90,000 contributions had been received, totalling £1,606,929. The Fund's final sum was approximately £1,750,000 (equivalent to £23 million in 20182018). The concerns of the village and donors grew about how the money in the fund would be used: some felt it should be used to compensate the bereaved, whilst others felt it should benefit the wider community. The funds paid for the memorial garden and cemetery along with other facilities to aid the regeneration of Aberfan both physically and emotionally.

The cemetery is where many of the victims are buried. The original Portland and Nabresina Stone memorials erected shortly after the disaster began to deteriorate, and in 2007 the Aberfan Memorial Charity refurbished the garden area, including all of the archways and memorials. The weathered masonry was replaced with polished pearl white granite, all inscriptions were re-engraved and additional archways were erected.

A memorial garden was opened on the site of Pantglas Primary School, which was destroyed during the disaster. The park was partly opened by the Queen, accompanied by the Duke of Edinburgh, on her visit to Aberfan in 1974.

The Aberfan Memorial Charity was founded in 1989 and is responsible for the maintenance and repair of the cemetery and memorial garden.

Bethania Welsh Independent Chapel was built in 1876 and rebuilt in 1885. The chapel was demolished in 1967 and a new chapel erected in 1970. By 2007 the chapel had fallen into disrepair and was closed; memorial items from the disaster were relocated to Cardiff Bay.

Aberfan Calvinistic Methodist chapel was built 1876, in an Italianate style. The foundation stone was laid by Sarah Griffiths, wife of the owner of the Aberfan Estate. It became a Grade II listed building in August 1999, for its architectural interest as a well-designed Victorian chapel with an unaltered stone facade; it was judged to be prominent in Aberfan, and had retained its interior with a good gallery. After the Aberfan disaster, the chapel was furnished with a memorial organ by the Queen. After extensive renovation, the chapel reopened at Easter 2008, but dry rot quickly set in, destroying newly installed window frames and beams. The cost of repair was estimated at £60,000. In August 2012 parishioners were banned from attending the church after an inspection condemned the building, and in October it was offered for sale, with a guide price of £22,000.

In 2015 a fire was reported at the chapel in the early hours of 11 July. Fire crews from Merthyr, Treharris, Abercynon, Aberbargoed, Pontypridd and Barry attended, spending a total of eight hours at the scene. Nearby houses were evacuated. A 27-year-old man was later arrested in relation to the fire. 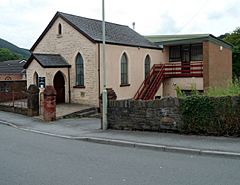 The village has two smaller chapels: the former Smyrna Baptist Chapel, built in 1877, which is now closed and is used as a community centre, and the Zion Methodist Chapel, originally English Primitive Methodist, located on Bridge Street and built in 1891.

Aberfan lies next to the main A470 road, but its nearest junction is 4 miles (6.4 km) north of the village. Aberfan is served by Merthyr Vale railway station, on the Merthyr line. The Taff Trail, a long-distance cycle route and footpath, passes through Aberfan, partly following the route of the filled-in Glamorganshire Canal.

All content from Kiddle encyclopedia articles (including the article images and facts) can be freely used under Attribution-ShareAlike license, unless stated otherwise. Cite this article:
Aberfan Facts for Kids. Kiddle Encyclopedia.