It has a very wide Indo-Pacific distribution. It is perhaps most common in Australia, but can occur at tropical and subtropical area's from the Red Sea and the east African coast across the Indian Ocean, and across the Pacific Ocean to the west coast of Central America. It occurs where coral reefs or hard coral communities occur in this region. 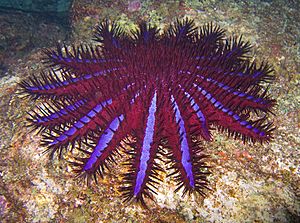 The body form of the crown-of-thorns starfish is the same as that of a typical starfish. Its special traits, however, include being disc-shaped, multiple-armed, flexible, and heavily spined.

Adult crown-of-thorns starfish normally range in size from 25 to 35 cm (9.8 to 13.8 in). They have up to 21 arms. Although the body of the crown of thorns has a stiff appearance, it is able to bend and twist to fit around the contours of the corals on which it feeds. They are usually of subdued colours, pale brown to grey-green, but they may be garish with bright warning colours in some parts of their wide range.

The long, sharp spines on the sides of the starfish's arms and upper surface resemble thorns and create a crown-like shape, giving the creature its name. The spines are stiff and very sharp, and readily pierce through soft surfaces. When the starfish is removed from the water, the body surface ruptures and the body fluid leaks out, so the body collapses and flattens. The spines bend over and flatten, as well. They recover their shape when re-immersed, if they are still alive.

The crown-of-thorns is well known for its destructive habits of eating coral, especially on the Great Barrier Reef, which is a World Heritage Site. Usually, when there are not too many of them, these sea stars help maintain the coral reef by preventing the faster-growing coral from taking over the coral reef. However, when there are too many crown-of-thorns, they can devastate the reef.

The adult crown-of-thorns is a carnivorous predator that usually preys on reef coral polyps. It climbs onto a section of living coral colony using the large number of tube feet on its oral surface and flexible body. It fits closely to the surface of the coral, even the complex surfaces of branching corals.

The stomach surface secretes digestive enzymes that allow the starfish to absorb nutrients from the liquefied coral tissue. This leaves a white scar of coral skeleton which is rapidly infested with filamentous algae. An individual starfish can consume up to 6 square metres (65 sq ft) of living coral reef per year.

The elongated sharp spines covering nearly the entire upper surface of the crown-of-thorns serve as a mechanical defense against large predators. It also has a chemical defense.

Population numbers for the crown-of-thorns have been increasing since the 1970s. However, historic records of distribution patterns and numbers are hard to come by, as SCUBA technology, necessary to conduct population censuses, had only been developed in the previous few decades.

To prevent overpopulation of crown-of-thorns causing widespread destruction to coral reef habitats, humans have implemented a variety of control measures. Manual removals have been successful, but are relatively labour-intensive. Injecting sodium bisulphate into the starfish is the most efficient measure in practice. Sodium bisulphate is deadly to crown-of-thorns, but it does not harm the surrounding reef and oceanic ecosystems.

All content from Kiddle encyclopedia articles (including the article images and facts) can be freely used under Attribution-ShareAlike license, unless stated otherwise. Cite this article:
Crown-of-thorns starfish Facts for Kids. Kiddle Encyclopedia.