Acanthocereus tetragonus is a species of cactus that is native to Florida and the Lower Rio Grande Valley of Texas in the United States, Mexico, Central America, the Caribbean, and northern South America. The species is invasive in New Caledonia. Common names include night-blooming cereus, barbed-wire cactus, sword-pear, triangle cactus, and Órgano-alado de pitaya (Spanish). It was originally described by Carl Linnaeus in 1753 as Cactus tetragonus but was moved to the genus Acanthocereus in 1938 by Pieter Wagenaar Hummelinck.

This highly spiny, often large, and thicket-forming cactus has stems up to 10 feet or possibly taller. It is native to the coastal hammocks and hot, dry coastal habitats and thickets and sandy coastal habitats of central and southern Florida and the Keys, south into the Caribbean. The flowers are showy and are white with a deep red and orange or red-orange center. The flowers bloom at night and close during the day. This cactus blooms a few times a year for several weeks at a time. This cactus often forms thickets in coastal hammocks which can be impenetrable and spiny. 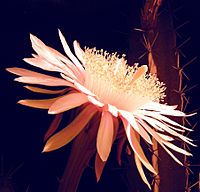 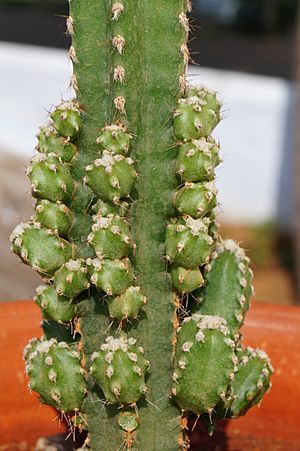 Young stems of the barbed-wire cactus can be eaten as a vegetable either cooked or raw, while the fruits are edible and sweet. It is sometimes cultivated as an ornamental. It is sometimes planted as a living fence. The Fairy Castle Cactus, a miniature cultivar of this species, has many curved branches that resemble the turrets of a castle.

All content from Kiddle encyclopedia articles (including the article images and facts) can be freely used under Attribution-ShareAlike license, unless stated otherwise. Cite this article:
Acanthocereus tetragonus Facts for Kids. Kiddle Encyclopedia.