Acmena hemilampra, known as the broad-leaved lilly pilly, is a rainforest tree from New South Wales and Queensland. Often seen on sand by the sea in littoral rainforests, also seen further inland by streams. It reaches its best development in the red/brown volcanic soils, such as around the Mount Warning caldera. The natural range of distribution is from Yamba to Cape York Peninsula in the far north eastern tip of Australia.

A medium to large tree, reaching a height of 35 metres and a trunk diameter of 120 cm. The trunk is flanged or buttressed in larger trees, with red brown bark. The bark is fairly smooth on younger trees. Fissured and flaky on larger trees.

Leaves are opposite, not toothed, 4 to 9 cm long, relatively thick and broad, with a blunt point at the tip, which contrasts with the prominent drip tip on the Lilly Pilly. The underside of the leaf is dull, sometimes glaucous. Leaf venation is more evident on the upper surface, oil dots few in number.

Cream flowers form on panicles in the months of October to January. A white round shaped berry forms from May to August, often in large clusters.

Removal of the flesh from the seed is advised to assist seed germination. Germination is slow, taking up to 80 days. However, cuttings strike well. 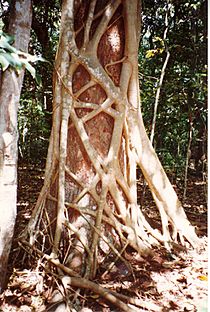 All content from Kiddle encyclopedia articles (including the article images and facts) can be freely used under Attribution-ShareAlike license, unless stated otherwise. Cite this article:
Acmena hemilampra Facts for Kids. Kiddle Encyclopedia.