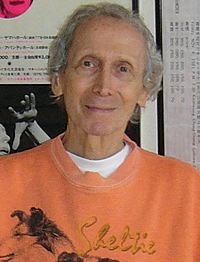 Adam Darius (10 May 1930 – 3 December 2017) was an American dancer, mime artist, writer and choreographer. As a performer, he appeared in over 85 countries across six continents. As a writer, he published 19 books and wrote 22 plays. He was born in New York City. He was known for creating plays based on the lives of Marilyn Monroe and Anne Frank.

All content from Kiddle encyclopedia articles (including the article images and facts) can be freely used under Attribution-ShareAlike license, unless stated otherwise. Cite this article:
Adam Darius Facts for Kids. Kiddle Encyclopedia.