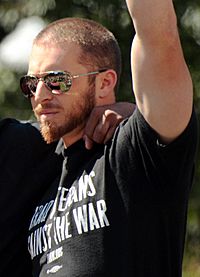 Adam Charles Kokesh (born February 1, 1982 in San Francisco, California) is an American political activist. He is a decorated veteran of the War in Iraq, Kokesh came to disparage war and advocate nonviolent resistance to power. He is a member of the Libertarian Party. He has called for a "new American revolution" for the "orderly dissolution of the federal government." He was raised in Santa Fe, New Mexico. He now lives in Arizona.

Kokesh announced that he would run for President of the United States under the Libertarian Party ticket in the 2020 United States presidential election.

All content from Kiddle encyclopedia articles (including the article images and facts) can be freely used under Attribution-ShareAlike license, unless stated otherwise. Cite this article:
Adam Kokesh Facts for Kids. Kiddle Encyclopedia.