Adamstown (Irish: Baile Adaim, meaning Town of Adam) is a planned suburban development. The new settlement is being developed 16 km from Dublin city centre, on a 220 hectare site just south of Lucan, west of the Griffeen River and north of the Grand Canal. No date has been set for the official granting of any specific official status but development is underway since 2005. As of 2017, perhaps 3,500 of a planned population of 25,000 were resident. Adamstown is in the jurisdiction of South Dublin. 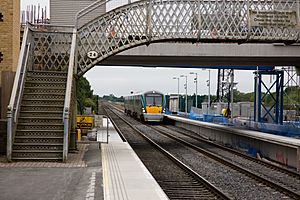 Adamstown is beside the Dublin-Kildare railway line The new and privately funded railway station opened on 10 April 2007, provisioned with 5 platforms.

The settlement is beside the N4 national primary route. Weston Airport is nearby.

Adamstown originated with the South Dublin County Development Plan of 1998, which envisaged the creation of several "new towns" - only Adamstown made it to the development stage. The provision of a new railway station was an integral part of its development, together with the provision of new schools, shopping and sporting facilities within walking distance in the neighbourhood. The new settlement was designed to promote public transport and reduce car dependence.

Infrastructure works officially commenced on 7 February 2005, and on 16 February 2006 the first houses went on the market.

It was intended that after an initial ten years of development the development would have around 10,000 homes, and about 25,000 people. To date around 1,200 homes have been constructed.

The homes built in Adamstown were to be familiar types of house and apartment block but with a layout dissimilar to other later 20th century developments in Ireland in that they were to incorporate modern urban design concepts. These primarily include permeability, and a 'joined up' street system, avoiding the common cul de sac layouts. The formation of streets is designed to reduce car usage. These features, combined with ease of access to the train station is intended to promote walking and cycling. There is a strict limit on high-rise buildings, three to four storeys being the norm.

As part of the planning permission it was incumbent on the developers to complete various infrastructure and community facilities on a phased basis, to avoid the social problems that can blight large-scale suburban developments, before proceeding with later phases of housing. The train station and two schools, and a few retail facilities, are now operating.

Development slowed after the initial phases were complete, and parts of the proposed settlement remain boarded off.

On February 12, 2009, Adamstown, the new neighbourhood being built on the west side of Dublin, won a "Sustainable Communities" award from the UK's Royal Town Planning Institute. It was the only non-UK project to pick up a prize at the annual awards ceremony, and was entered by South Dublin County Council and Chartridge, the developers (comprising Castlethorn Construction, Maplewood Homes and Tierra Construction). The award recognises that Adamstown has been properly planned and balances living accommodation with infrastructure, such as shops, cinema, train station, swimming pool, library, health centres, restaurants, schools, mixed places of worship and parks, among other facilities. Adamstown is Ireland's first Strategic Development Zone, which means that the construction of homes runs in tandem with such facilities. The judges praised the design and layout of Adamstown for its "modern vernacular" and said it would be a "model for development elsewhere".

There are two primary schools, a large secondary school and a crèche.

The local secondary school, Adamstown Community College, opened in September 2009. From sixty nine students entering the school it now has over a thousand students attending there. The school crest, of a castle, originates from an old castle that use to stand where the current school stands today. The secondary school is operated by County of Dublin VEC.

A new structure, Club Adamstown, was being put in place as of 2020 by the local council to offer sporting opportunities, including cricket, to local children.

All content from Kiddle encyclopedia articles (including the article images and facts) can be freely used under Attribution-ShareAlike license, unless stated otherwise. Cite this article:
Adamstown, Dublin Facts for Kids. Kiddle Encyclopedia.