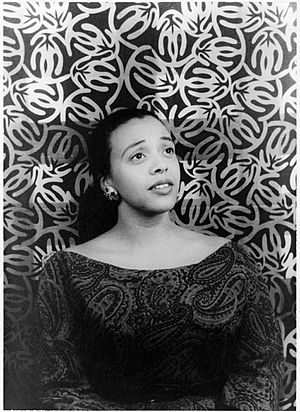 Adele Addison (born July 24, 1925) is an American soprano. She was a figure in the classical music world during the 1950s and 1960s. She was an opera singer. However, she spent most of her career performing in recital and concert. A lot of her singing is from the Baroque period. She is well-known for performing the singing voice of Bess (played by Dorothy Dandridge) in the movie Porgy and Bess (1959).

Addison was born in New York City. She grew up in Springfield, Massachusetts. She has had type 2 diabetes since childhood. In 1958, she married Norman Berger, a research scientist and professor at New York University. Berger died in 2005, after a 47-year marriage.

All content from Kiddle encyclopedia articles (including the article images and facts) can be freely used under Attribution-ShareAlike license, unless stated otherwise. Cite this article:
Adele Addison Facts for Kids. Kiddle Encyclopedia.