Kids Encyclopedia Facts
For the islands in the Bismarck Archipelago, see Admiralty Islands. 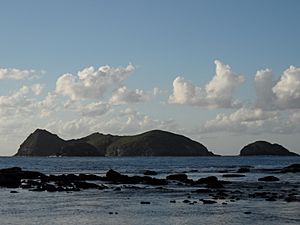 The Admiralty Group of islets consists of eight rocky outcrops within 2 km of the north of Lord Howe Island, from south to north:

Roach Island is the largest, being about 15 ha in area, 800 m long and 86 m high, with a much-photographed 15-metre-tall tunnel at its northern end. The basalt lava flows are crossed by many dikes. The vegetation consists of grasses, sedges and a few bushes.

These islets are noted for the nesting populations of seabirds in spring and summer in greater numbers than anywhere else on Lord Howe Island, mainly sooty terns, masked boobies and brown noddies.

All content from Kiddle encyclopedia articles (including the article images and facts) can be freely used under Attribution-ShareAlike license, unless stated otherwise. Cite this article:
Admiralty Group Facts for Kids. Kiddle Encyclopedia.