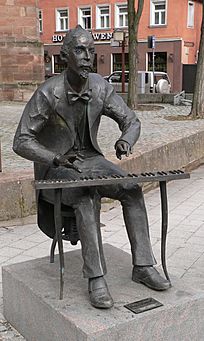 Statue of von Henselt in his hometown of Schwabach

Adolf von Henselt (born Schwabach, Bavaria, May 9 1814; died Warmbrunn (now Cieplice), Silesia, October 10 1889) was a German pianist and composer. He had piano lessons from Hummel in Weimar. When he was a young man he played in concerts all over Germany. Then he went to Russia where he was very successful and he settled there to live. He became pianist at the court of the tsar and taught the tsar’s children how to play the piano.

Henselt was known for his beautiful playing of the music of Chopin. He was very good at playing widely spaced arpeggios and could make them sound very smooth (legato) even if he was not using the pedal.

As a composer he is mostly remembered today for a few of his short works which are often quite sentimental, e.g. Frühlingslied (Spring Song) and Si oiseau j’étais (If I were a bird).

All content from Kiddle encyclopedia articles (including the article images and facts) can be freely used under Attribution-ShareAlike license, unless stated otherwise. Cite this article:
Adolf von Henselt Facts for Kids. Kiddle Encyclopedia.