Johann Nepomuk Hummel (14 November 1778 – 17 October 1837) was an Austrian composer and virtuoso pianist. His music reflects the transition from the Classical to the Romantic musical era. 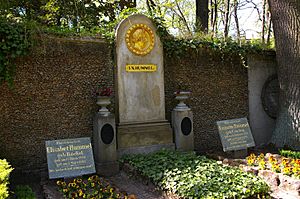 Hummel was born in Pressburg, Kingdom of Hungary. His father, Johannes Hummel, was the director of the Imperial School of Military Music in Vienna and the conductor there of Emanuel Schikaneder's theatre orchestra at the Theater auf der Wieden.

Like Wolfgang Amadeus Mozart, Hummel was a child prodigy. At the age of eight, he was offered music lessons by Mozart, who was impressed with his ability. Hummel was taught and housed by Mozart for two years free of charge and made his first concert appearance at the age of nine at one of Mozart's concerts.

In 1832, at the age of 54 and in failing health, Hummel began to devote less energy to his duties as a music director and as a result found himself in partial retirement from 1832 until his death in 1837.

All content from Kiddle encyclopedia articles (including the article images and facts) can be freely used under Attribution-ShareAlike license, unless stated otherwise. Cite this article:
Johann Nepomuk Hummel Facts for Kids. Kiddle Encyclopedia.