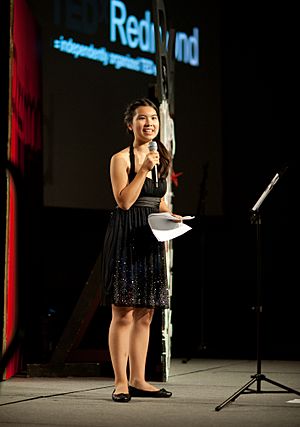 Adora Lily Svitak (born October 15, 1997) is an American child prodigy. When she was seven her first book, Flying Fingers, was published around the world. Her second book, Dancing Fingers, was published in April 2008. In January 2009 Channel 4 showed a documentary about gifted children called The World's Cleverest Child and Me. Svitak was in it. On March 14, 2011 her first novel, Yang in Disguise, was published. In February 2010 Svitak gave a talk for TED called "What Adults Can Learn From Kids".

Her mother, Joyce Can Zou Svitak, was born in China. She moved to the US in 1988. Her father, John Svitak, is a fourth generation Czech Republic migrant. He is a science and maths teacher. Svitak is a feminist. She lives in Seattle. She goes to Redmond High School.

All content from Kiddle encyclopedia articles (including the article images and facts) can be freely used under Attribution-ShareAlike license, unless stated otherwise. Cite this article:
Adora Svitak Facts for Kids. Kiddle Encyclopedia.