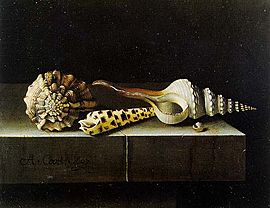 Adriaen Coorte (about 1665 – 1707) was a Dutch painter. He mainly painted 'still life'. He signed works between 1683 and 1707. Most of his paintings are small. His style is typical of Dutch 17th century still life painting. Other Dutch painters who lived at the same time had a different style of painting. Coorte was "one of the last practitioners of this intimate category". 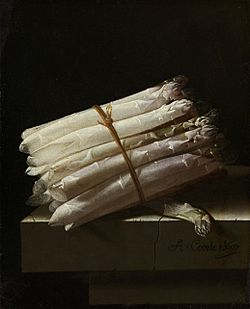 Very little is known about his life. He was probably born in Middelburg and also died there. He became a pupil of Melchior d'Hondecoeter around 1680 in Amsterdam. From 1683 he seems to have returned to Middelburg, where he set up a workshop and signed his small, carefully balanced minimalist still lifes. He often painted on paper that was glued to a wooden panel. About 80 signed works by him have been catalogued, and nearly all of them follow the same pattern; small arrangements of fruits, vegetables, or shells on a stone slab, lit from above, with the dark background typical of still lifes earlier in the century. Instead of the Chinese or silver vessels favoured by his contemporaries, his tableware is very basic pottery. "Objects and light are studied intensely, and are painted with a wondrous tenderness". Neither his birth nor death date is certain, and archival evidence only exists in Middelburg for his membership in the Guild of St. Luke there from 1695 onwards, when he was fined for selling a painting without being a member of the guild. His works appear frequently in contemporary Middelburg taxation inventories

Coorte was probably not well known to the people who lived at the same time, outside the city of Middelburg. Much like Vermeer, he was almost entirely forgotten. In the 1950s, the Dutch art historian Laurens J. Bol revived his reputation, beginning with an article in 1952, and finally publishing the first monograph and catalogue raissone on Coorte in 1977 (Adriaen Coorte, Amsterdam). Bol arranged an exhibition of 35 examples of Coorte's work in 1958 at the Dordrechts Museum. This became a sensation in the Netherlands; the poets Hans Faverey and Ed Leeflang were both inspired by the paintings. In 2003 there was an exhibition at the National Gallery of Art, Washington. In 2008 a new travelling exhibition was set up; Ode to Coorte, that was nearly as successful, making Coorte the most celebrated "rediscovered" Dutch Baroque painter of recent decades.

His paintings have been compared to Spanish Bodegones, but he may also have been influenced by older painters:

All content from Kiddle encyclopedia articles (including the article images and facts) can be freely used under Attribution-ShareAlike license, unless stated otherwise. Cite this article:
Adriaen Coorte Facts for Kids. Kiddle Encyclopedia.